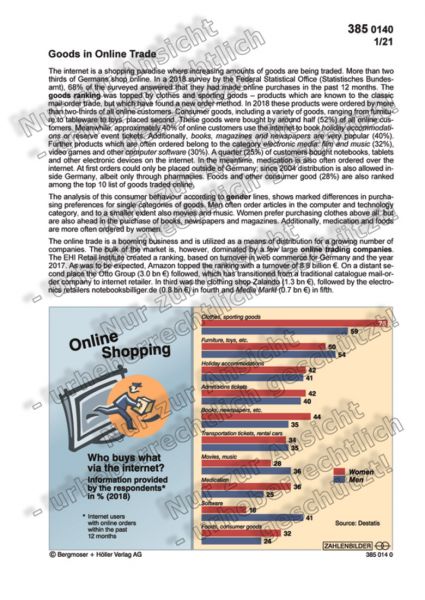 The internet is a shopping paradise where increasing amounts of goods are being traded. More than two thirds of Germans shop online. In a 2018 survey by the Federal Statistical Office (Statistisches Bundesamt), 68% of the surveyed answered that they had made online purchases in the past 12 months. The goods ranking was topped by clothes and sporting goods– products which are known to the classic mail-order trade, but which have found a new order method. In 2018 these products were ordered by more than two-thirds of all online customers. Consumer goods, including a variety of goods, ranging from furniture to tableware to toys, placed second. These goods were bought by around half (52%) of all online customers. Meanwhile, approximately 40% of online customers use the internet to book holiday accommodations or reserve event tickets. Additionally, books, magazines and newspapers are very popular (40%). Further products which are often ordered belong to the category electronic media: film and music (32%), video games and other computer software (30%). A quarter (25%) of customers bought notebooks, tablets and other electronic devices on the internet. In the meantime, medication is also often ordered over the internet. At first orders could only be placed outside of Germany; since 2004 distribution is also allowed inside Germany, albeit only through pharmacies. Foods and other consumer good (28%) are also ranked among the top 10 list of goods traded online.

The analysis of this consumer behaviour according to gender lines, shows marked differences in purchasing preferences for single categories of goods. Men often order articles in the computer and technology category, and to a smaller extent also movies and music. Women prefer purchasing clothes above all, but are also ahead in the purchase of books, newspapers and magazines. Additionally, medication and foods are more often ordered by women.

The online trade is a booming business and is utilized as a means of distribution for a growing number of companies. The bulk of the market is, however, dominated by a few large online trading companies. The EHI Retail Institute created a ranking, based on turnover in web commerce for Germany and the year 2017. As was to be expected, Amazon topped the ranking with a turnover of 8.8 billion €. On a distant second place the Otto Group (3.0 bn €) followed, which has transitioned from a traditional catalogue mail-order company to internet retailer. In third was the clothing shop Zalando (1.3 bn €), followed by the electronics retailers notebooksbilliger.de (0.8 bn €) in fourth and Media Markt (0.7 bn €) in fifth.