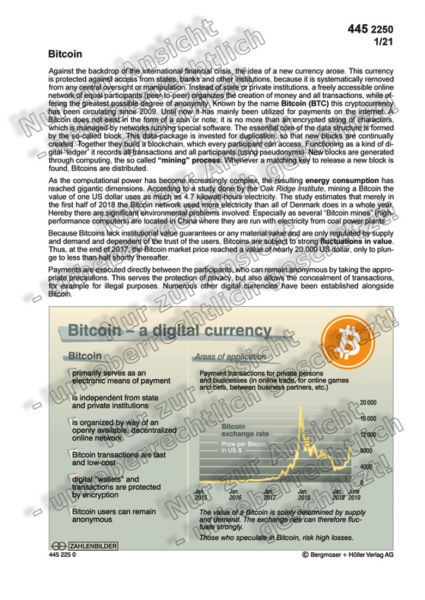 Against the backdrop of the international financial crisis, the idea of a new currency arose. This currency is protected against access from states, banks and other institutions, because it is systematically removed from any central oversight or manipulation. Instead of state or private institutions, a freely accessible online network of equal participants (peer-to-peer) organizes the creation of money and all transactions, while offering the greatest possible degree of anonymity. Known by the name Bitcoin (BTC) this cryptocurrency has been circulating since 2009. Until now it has mainly been utilized for payments on the internet. A Bitcoin does not exist in the form of a coin or note; it is no more than an encrypted string of characters, which is managed by networks running special software. The essential core of the data structure is formed by the so-called block. This data-package is invested for duplication, so that new blocks are continually created. Together they build a blockchain, which every participant can access. Functioning as a kind of digital “ledger” it records all transactions and all participants (using pseudonyms). New blocks are generated through computing, the so called “mining” process: Whenever a matching key to release a new block is found, Bitcoins are distributed.

As the computational power has become increasingly complex, the resulting energy consumption has reached gigantic dimensions. According to a study done by the Oak Ridge Institute, mining a Bitcoin the value of one US dollar uses as much as 4.7 kilowatt-hours electricity. The study estimates that merely in the first half of 2018 the Bitcoin network used more electricity than all of Denmark does in a whole year. Hereby there are significant environmental problems involved: Especially as several “Bitcoin mines” (high-performance computers) are located in China where they are run with electricity from coal power plants.

Because Bitcoins lack institutional value guarantees or any material value and are only regulated by supply and demand and dependent of the trust of the users, Bitcoins are subject to strong fluctuations in value. Thus, at the end of 2017, the Bitcoin market price reached a value of nearly 20,000 US dollar, only to plunge to less than half shortly thereafter.

Payments are executed directly between the participants, who can remain anonymous by taking the appropriate precautions. This serves the protection of privacy, but also allows the concealment of transactions, for example for illegal purposes. Numerous other digital currencies have been established alongside Bitcoin.