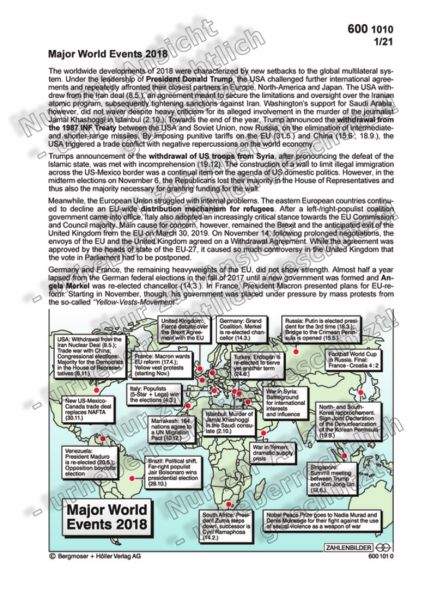 The worldwide developments of 2018 were characterized by new setbacks to the global multilateral system. Under the leadership of President Donald Trump, the USA challenged further international agreements and repeatedly affronted their closest partners in Europe, North-America and Japan. The USA withdrew from the Iran deal (8.5.), an agreement meant to secure the limitations and oversight over the Iranian atomic program, subsequently tightening sanctions against Iran. Washington’s support for Saudi Arabia, however, did not waver despite heavy criticism for its alleged involvement in the murder of the journalist Jamal Khashoggi in Istanbul (2.10.). Towards the end of the year, Trump announced the withdrawal from the 1987 INF Treaty between the USA and Soviet Union, now Russia, on the elimination of intermediate- and shorter-range missiles. By imposing punitive tariffs on the EU (31.5.) and China (15.6., 18.9.), the USA triggered a trade conflict with negative repercussions on the world economy.

Trumps announcement of the withdrawal of US troops from Syria, after pronouncing the defeat of the Islamic state, was met with incomprehension (19.12). The construction of a wall to limit illegal immigration across the US-Mexico border was a continual item on the agenda of US domestic politics. However, in the midterm elections on November 6, the Republicans lost their majority in the House of Representatives and thus also the majority necessary for granting funding for the wall.

Meanwhile, the European Union struggled with internal problems. The eastern European countries continued to decline an EU-wide distribution mechanism for refugees. After a left-/right-populist coalition government came into office, Italy also adopted an increasingly critical stance towards the EU Commission and Council majority. Main cause for concern, however, remained the Brexit and the anticipated exit of the United  Kingdom from the EU on March 30, 2019. On November 14, following prolonged negotiations, the envoys of the EU and the United Kingdom agreed on a Withdrawal Agreement. While the agreement was approved by the heads of state of the EU-27, it caused so much controversy in the United Kingdom that the vote in Parliament had to be postponed.

Germany and France, the remaining heavyweights of the EU, did not show strength. Almost half a year lapsed from the German federal elections in the fall of 2017 until a new government was formed and Angela Merkel was re-elected chancellor (14.3.). In France, President Macron presented plans for EU-reform. Starting in November, though, his government was placed under pressure by mass protests from the so-called “Yellow-Vests-Movement”.