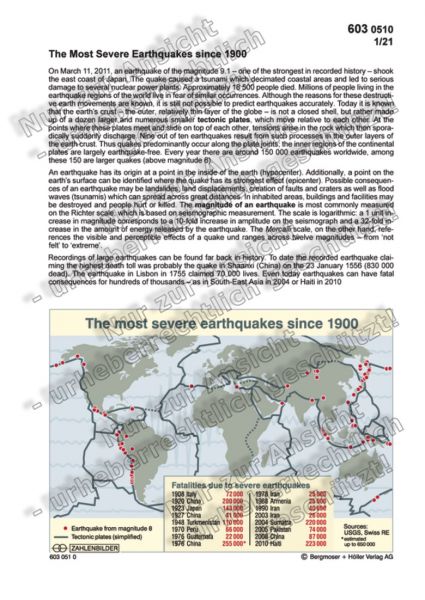 Beschreibung
Beschreibung
On March 11, 2011, an earthquake of the magnitude 9.1 – one of the strongest in recorded... mehr
Menü schließen
Mehr Details zu "The Most Severe Earthquakes since 1900"

On March 11, 2011, an earthquake of the magnitude 9.1 – one of the strongest in recorded history – shook the east coast of Japan. The quake caused a tsunami which decimated coastal areas and led to serious damage to several nuclear power plants. Approximately 18 500 people died. Millions of people living in the earthquake regions of the world live in fear of similar occurrences. Although the reasons for these destructive earth movements are known, it is still not possible to predict earthquakes accurately. Today it is known that the earth’s crust – the outer, relatively thin layer of the globe – is not a closed shell, but rather made up of a dozen larger and numerous smaller tectonic plates, which move relative to each other. At the points where these plates meet and slide on top of each other, tensions arise in the rock which then sporadically suddenly discharge. Nine out of ten earthquakes result from such processes in the outer layers of the earth crust. Thus quakes predominantly occur along the plate joints; the inner regions of the continental plates are largely earthquake-free. Every year there are around 150 000 earthquakes worldwide, among these 150 are larger quakes (above magnitude 6).

An earthquake has its origin at a point in the inside of the earth (hypocenter). Additionally, a point on the earth’s surface can be identified where the quake has its strongest effect (epicenter). Possible consequences of an earthquake may be landslides, land displacements, creation of faults and craters as well as flood waves (tsunamis) which can spread across great distances. In inhabited areas, buildings and facilities may be destroyed and people hurt or killed. The magnitude of an earthquake is most commonly measured on the Richter scale, which is based on seismographic measurement. The scale is logarithmic: a 1 unit increase in magnitude corresponds to a 10-fold increase in amplitude on the seismograph and a 32-fold increase in the amount of energy released by the earthquake. The Mercalli scale, on the other hand, references the visible and perceptible effects of a quake und ranges across twelve magnitudes – from ‘not felt’ to ‘extreme’.

Recordings of large earthquakes can be found far back in history. To date the recorded earthquake claiming the highest death toll was probably the quake in Shaanxi (China) on the 23 January 1556 (830 000 dead). The earthquake in Lisbon in 1755 claimed 70 000 lives. Even today earthquakes can have fatal consequences for hundreds of thousands – as in South-East Asia in 2004 or Haiti in 2010