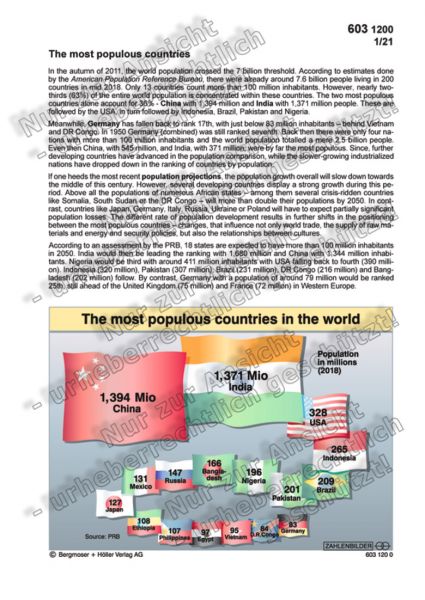 Beschreibung
Beschreibung
In the autumn of 2011, the world population crossed the 7 billion threshold. According to... mehr
Menü schließen
Mehr Details zu "The most populous countries"

In the autumn of 2011, the world population crossed the 7 billion threshold. According to estimates done by the American Population Reference Bureau, there were already around 7.6 billion people living in 200 countries in mid 2018. Only 13 countries count more than 100 million inhabitants. However, nearly two-thirds (63%) of the entire world population is concentrated within these countries. The two most populous countries alone account for 36% - China with 1,394 million and India with 1,371 million people. These are followed by the USA, in turn followed by Indonesia, Brazil, Pakistan and Nigeria.

Meanwhile, Germany has fallen back to rank 17th, with just below 83 million inhabitants – behind Vietnam and DR Congo. In 1950 Germany (combined) was still ranked seventh. Back then there were only four nations with more than 100 million inhabitants and the world population totalled a mere 2.5 billion people. Even then China, with 545 million, and India, with 371 million, were by far the most populous. Since, further developing countries have advanced in the population comparison, while the slower-growing industrialized nations have dropped down in the ranking of countries by population.

If one heeds the most recent population projections, the population growth overall will slow down towards the middle of this century. However, several developing countries display a strong growth during this period. Above all the populations of numerous African states – among them several crisis-ridden countries like Somalia, South Sudan or the DR Congo – will more than double their populations by 2050. In contrast, countries like Japan, Germany, Italy, Russia, Ukraine or Poland will have to expect partially significant population losses. The different rate of population development results in further shifts in the positioning between the most populous countries – changes, that influence not only world trade, the supply of raw materials and energy and security policies, but also the relationships between cultures.

According to an assessment by the PRB, 18 states are expected to have more than 100 million inhabitants in 2050. India would then be leading the ranking with 1,680 million and China with 1,344 million inhabitants. Nigeria would be third with around 411 million inhabitants with USA falling back to fourth (390 million). Indonesia (320 million), Pakistan (307 million), Brazil (231 million), DR Congo (216 million) and Bangladesh (202 million) follow. By contrast, Germany with a population of around 79 million would be ranked 25th, still ahead of the United Kingdom (75 million) and France (72 million) in Western Europe.