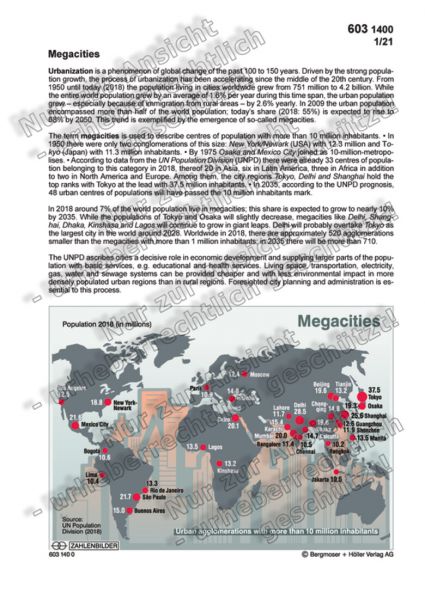 Beschreibung
Beschreibung
Urbanization is a phenomenon of global change of the past 100 to 150 years. Driven by the... mehr
Menü schließen
Mehr Details zu "Megacities"

Urbanization is a phenomenon of global change of the past 100 to 150 years. Driven by the strong population growth, the process of urbanization has been accelerating since the middle of the 20th century. From 1950 until today (2018) the population living in cities worldwide grew from 751 million to 4.2 billion. While the entire world population grew by an average of 1.6% per year during this time span, the urban population grew – especially because of immigration from rural areas – by 2.6% yearly. In 2009 the urban population encompassed more than half of the world population; today’s share (2018: 55%) is expected to rise to 68% by 2050. This trend is exemplified by the emergence of so-called megacities.

In 2018 around 7% of the world population live in megacities; this share is expected to grow to nearly 10% by 2035. While the populations of Tokyo and Osaka will slightly decrease, megacities like Delhi, Shanghai, Dhaka, Kinshasa and Lagos will continue to grow in giant leaps. Delhi will probably overtake Tokyo as the largest city in the world around 2028. Worldwide in 2018, there are approximately 520 agglomerations smaller than the megacities with more than 1 million inhabitants; in 2035 there will be more than 710.

The UNPD ascribes cities a decisive role in economic development and supplying larger parts of the population with basic services, e.g. educational and health services. Living space, transportation, electricity, gas, water and sewage systems can be provided cheaper and with less environmental impact in more densely populated urban regions than in rural regions. Foresighted city planning and administration is essential to this process.