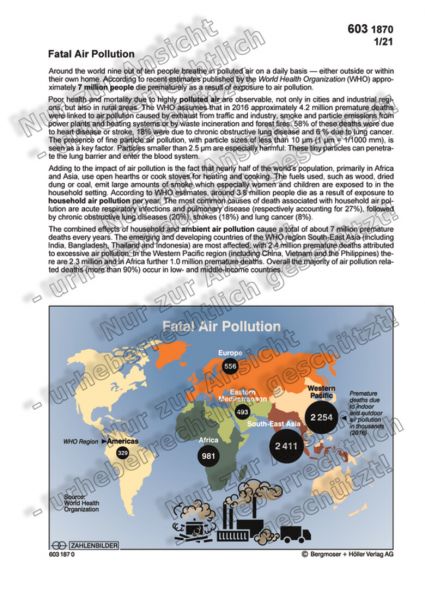 Around the world nine out of ten people breathe in polluted air on a daily basis — either outside or within their own home. According to recent estimates published by the World Health Organization (WHO) approximately 7 million people die prematurely as a result of exposure to air pollution.

Poor health and mortality due to highly polluted air are observable, not only in cities and industrial regions, but also in rural areas. The WHO assumes that in 2016 approximately 4.2 million premature deaths were linked to air pollution caused by exhaust from traffic and industry, smoke and particle emissions from power plants and heating systems or by waste incineration and forest fires. 58% of these deaths were due to heart disease or stroke, 18% were due to chronic obstructive lung disease and 6 % due to lung cancer. The presence of fine particle air pollution, with particle sizes of less than 10 µm (1 µm = 1/1000 mm), is seen as a key factor. Particles smaller than 2.5 µm are especially harmful: These tiny particles can penetrate the lung barrier and enter the blood system.

Adding to the impact of air pollution is the fact that nearly half of the world’s population, primarily in Africa and Asia, use open hearths or cook stoves for heating and cooking. The fuels used, such as wood, dried dung or coal, emit large amounts of smoke which especially women and children are exposed to in the household setting. According to WHO estimates, around 3.8 million people die as a result of exposure to household air pollution per year. The most common causes of death associated with household air pollution are acute respiratory infections and pulmonary disease (respectively accounting for 27%), followed by chronic obstructive lung diseases (20%), strokes (18%) and lung cancer (8%).