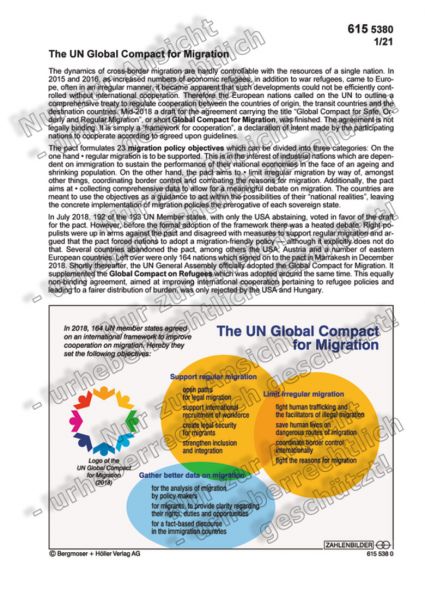 Beschreibung
Beschreibung
The UN Security Council is the most important body of the United Nations. It carries the primary... mehr
Menü schließen
Mehr Details zu "The UN Global Compact for Migration"

The UN Security Council is the most important body of the United Nations. It carries the primary responsibility for maintaining international security and peace. It is the only UN body which can make decisions that are binding for all member states. The rules by which the Council negotiates and makes decisions and the composition of its members remained unchanged for decades. The five victorious nations after the Second World War – the USA, Russia (succeeding the Soviet Union), United Kingdom, France and China – still maintain special privileges. Since 1945 they have been permanent members of the Security Council; when the Council is voting on substantive matters, a resolution can only pass if none of the permanent members cast a negative vote.

In addition to the five permanent members, there were originally six further non-permanent members in the Security Council. As numerous new, independent nations joined the United Nations in lieu of decolonization in the early 1960s, this composition soon appeared unfair and unbalanced. In 1965 the Security Council was therefore, only this one time, expanded. Since then the Council consists of 15 members: five permanent and ten non-permanent. The non-permanent members are elected by the General Assembly. Every year five non-permanent members are elected, with a two-thirds majority, for two-year terms by the General Assembly. The election of the non-permanent members follows a distribution scheme ensuring that the seats are allocated on a regional basis: three representing Africa, two for Asia-Pacific, one for Eastern Europe, two for Latin America and the Caribbean and two for Western Europe and others. There is a silent agreement to assign an Arab nation alternately either to the African or the Asian group every second year.