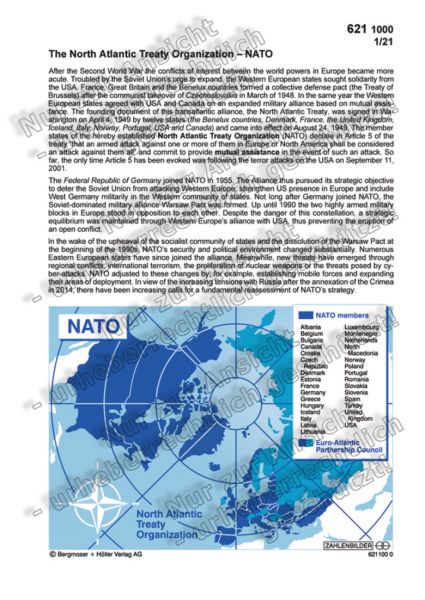 Beschreibung
Beschreibung
Ever since humanity has been in possession of nuclear weapons, it has had the ability to... mehr
Menü schließen
Mehr Details zu "The North Atlantic Treaty Organization ? NATO"

Ever since humanity has been in possession of nuclear weapons, it has had the ability to annihilate itself within a short period of time. The foundation for the development of nuclear weapons was the discovery of nuclear fission in 1938. When the nucleus of an atom is split, energy is released. Fissile matter is needed as a starting material, either Uranium 235 or Plutonium. When these matters are pressed together by an explosion, they reach a critical mass and a chain reaction is started. An atomic nucleus picks up a neutron, splits and releases several neutrons. These neutrons in turn “shoot” the nuclei of other atoms and so the number if nuclear fissions increases exponentially. One can start to grasp the magnitude of energy released by looking at Albert Einstein’s famous equation e=mc2: Accordingly, energy is equivalent to mass multiplied by the speed of light to the power of two. The speed of light is nearly 300 million m/s. Even a very small mass can release tremendous amounts of energy. Newer nuclear weapons are based on nuclear fusion, i.e. the fusion of atomic nuclei, and require hydrogen as a starting material. Here too, mass is abruptly converted into energy. For technical reasons, fusion-based weapons can develop a significantly higher explosive power than bombs based on nuclear fission.

The effects of a nuclear explosion are devastating on multiple levels. The shock wave produced by the explosion destroys everything in the vicinity and can even cause internal injuries to people at a great distance. The fireball in the epicentre will vaporize stone buildings and organic material, and the emanating heat radiation ignites extensive fires and may cause severe burns to people even at a great distance. Additionally, the radioactive explosive material releases ionizing radiation. The high dose at the epicentre kills immediately, lower doses further away damage cells and cause genetic mutations, which increases the risk of cancer for life. And that is not all: the rising radioactive cloud disperses itself in the troposphere and falls down as radioactive rain – depending on the weather conditions, this fallout can spread across more that a hundred kilometres. It contaminates the landscape for centuries.

The nuclear bombs dropped on Hiroshima and Nagasaki in August 1945 killed hundreds of thousands of people and till today the survivors and their children have an increased risk of developing cancer. The power of destruction of modern nuclear weapons exceed those bombs by more than a thousand-fold.