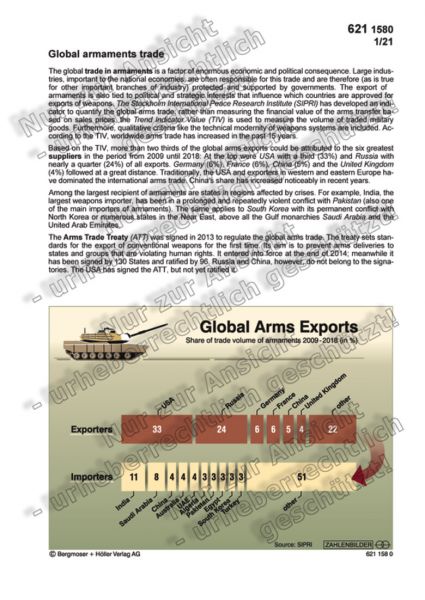 According to estimates published by the Stockholm International Peace Research Institute (SIPRI) the worldwide military expenditure in 2018 added up to 1822 billion US$ (at current prices and exchange rates). This was equivalent to 2.1% of global GDP. Transferred to the world population, this would equal an expenditure of 239 US$ per person for military purposes. When observing the actual development (at constant prices and exchange rates from 2017), global military expenditure dropped significantly after the end of the Cold War, but has been rising again notably since the turn of the millennium. Following a slight decline after 2011 it increased again after 2015.

In a country comparison, the USA was at the top by far, spending 649 billion US$ in 2018. The leading great power was responsible for over a third (36%) of the global military expenditure; its military budget exceeded those of the next seven states put together. After the terror attacks of September 11, 2001, US military expenditure strongly increased. Though after 2011 it decreased again. Reason for this were the cutbacks after the financial and economic crisis as well as the withdrawal of the US troops from Iraq and the reduction of troops in Afghanistan. In 2018 military expenditure rose again, following a transition to power politics under President Trump.

In Europe financial and political restrictions following the financial and economic crisis and the resulting debt crisis also led to a reduction of military budgets. The Ukraine crisis and the perceived threat posed by Russia pushed the expenditures back up again. France and the United Kingdom ranked fifth and sixth among the great powers with expenditures of 64 and 50 billion US$ respectively; Germany followed on rank 8 with 49 billion US$.

In Eastern Europe Russia, aiming to modernize its forces by 2020, had long been increasing its military expenditure; since 2016, however, there is a downward trend. In the Near East, Saudi Arabia reduced its military budget, while still placing third in the worldwide ranking in 2018.

In Asia, China continued the rapid expansion of its military capacities with an investment of 250 billion US$. In terms of military expenditure, the People’s Republic places second behind the USA since 2008, overtaking Japan in 2006. China’s armament isn’t only cause for worry for the USA, but principally its neighbours, which have unresolved territorial conflicts in the Chinese Ocean.