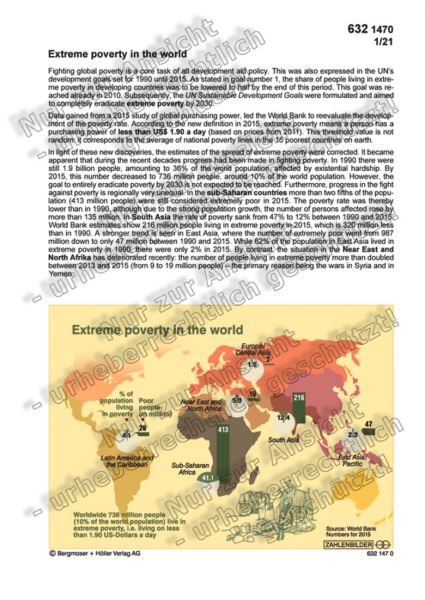 Beschreibung
Beschreibung
Fighting global poverty is a core task of all development aid policy. This was also expressed in... mehr
Menü schließen
Mehr Details zu "Extreme poverty in the world"

Fighting global poverty is a core task of all development aid policy. This was also expressed in the UN’s development goals set for 1990 until 2015. As stated in goal number 1, the share of people living in extreme poverty in developing countries was to be lowered to half by the end of this period. This goal was reached already in 2010. Subsequently, the UN Sustainable Development Goals were formulated and aimed to completely eradicate extreme poverty by 2030.

Data gained from a 2015 study of global purchasing power, led the World Bank to reevaluate the development of the poverty rate. According to the new definition in 2015, extreme poverty means a person has a purchasing power of less than US$ 1.90 a day (based on prices from 2011). This threshold value is not random: it corresponds to the average of national poverty lines in the 15 poorest countries on earth.

In light of these new discoveries, the estimates of the spread of extreme poverty were corrected. It became apparent that during the recent decades progress had been made in fighting poverty. In 1990 there were still 1.9 billion people, amounting to 36% of the world population, affected by existential hardship. By 2015, this number decreased to 736 million people, around 10% of the world population. However, the goal to entirely eradicate poverty by 2030 is not expected to be reached. Furthermore, progress in the fight against poverty is regionally very unequal. In the sub-Saharan countries more than two fifths of the population (413 million people) were still considered extremely poor in 2015. The poverty rate was thereby lower than in 1990, although due to the strong population growth, the number of persons affected rose by more than 135 million. In South Asia the rate of poverty sank from 47% to 12% between 1990 and 2015. World Bank estimates show 216 million people living in extreme poverty in 2015, which is 320 million less than in 1990. A stronger trend is seen in East Asia, where the number of extremely poor went from 987 million down to only 47 million between 1990 and 2015. While 62% of the population in East Asia lived in extreme poverty in 1990, there were only 2% in 2015. By contrast, the situation in the Near East and North Afrika has deteriorated recently: the number of people living in extreme poverty more than doubled between 2013 and 2015 (from 9 to 19 million people) – the primary reason being the wars in Syria and in Yemen.