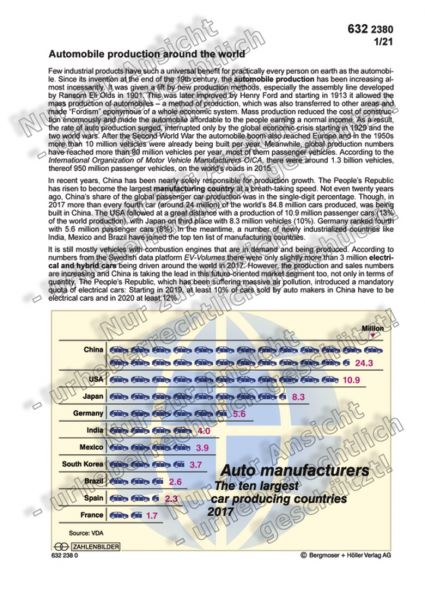 le. Since its invention at the end of the 19th century, the automobile production has been increasing almost incessantly. It was given a lift by new production methods, especially the assembly line developed by Ransom Eli Olds in 1901. This was later improved by Henry Ford and starting in 1913 it allowed the mass production of automobiles – a method of production, which was also transferred to other areas and made “Fordism” eponymous of a whole economic system. Mass production reduced the cost of construction enormously and made the automobile affordable to the people earning a normal income. As a result, the rate of auto production surged, interrupted only by the global economic crisis starting in 1929 and the two world wars. After the Second World War the automobile boom also reached Europe and in the 1950s more than 10 million vehicles were already being built per year. Meanwhile, global production numbers have reached more than 90 million vehicles per year, most of them passenger vehicles. According to the International Organization of Motor Vehicle Manufacturers OICA, there were around 1.3 billion vehicles, thereof 950 million passenger vehicles, on the world’s roads in 2015.

In recent years, China has been nearly solely responsible for production growth. The People’s Republic has risen to become the largest manufacturing country at a breath-taking speed. Not even twenty years ago, China’s share of the global passenger car production was in the single-digit percentage. Though, in 2017 more than every fourth car (around 24 million) of the world’s 84.8 million cars produced, was being built in China. The USA followed at a great distance with a production of 10.9 million passenger cars (13% of the world production), with Japan on third place with 8.3 million vehicles (10%). Germany ranked fourth with 5.6 million passenger cars (8%). In the meantime, a number of newly industrialized countries like India, Mexico and Brazil have joined the top ten list of manufacturing countries.

It is still mostly vehicles with combustion engines that are in demand and being produced. According to numbers from the Swedish data platform EV-Volumes there were only slightly more than 3 million electrical and hybrid cars being driven around the world in 2017. However, the production and sales numbers are increasing and China is taking the lead in this future-oriented market segment too, not only in terms of quantity. The People’s Republic, which has been suffering massive air pollution, introduced a mandatory quota of electrical cars: Starting in 2019, at least 10% of cars sold by auto makers in China have to be electrical cars and in 2020 at least 12%.