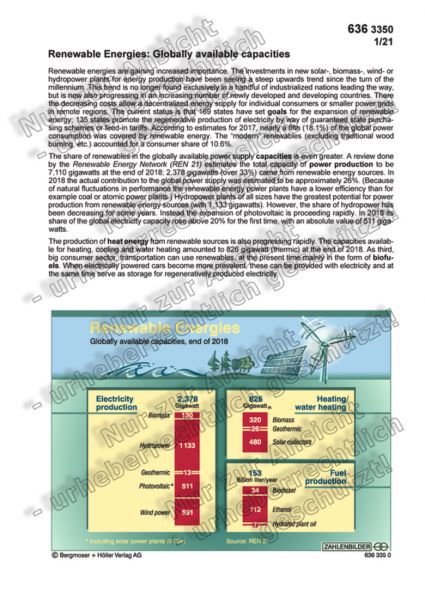 Renewable energies are gaining increased importance. The investments in new solar-, biomass-, wind- or hydropower plants for energy production have been seeing a steep upwards trend since the turn of the millennium. This trend is no longer found exclusively in a handful of industrialized nations leading the way, but is now also progressing in an increasing number of newly developed and developing countries. There the decreasing costs allow a decentralized energy supply for individual consumers or smaller power grids in remote regions. The current status is that 169 states have set goals for the expansion of renewable energy; 135 states promote the regenerative production of electricity by way of guaranteed state purchasing schemes or feed-in tariffs. According to estimates for 2017, nearly a fifth (18.1%) of the global power consumption was covered by renewable energy. The “modern” renewables (excluding traditional wood burning, etc.) accounted for a consumer share of 10.6%.

The share of renewables in the globally available power supply capacities is even greater. A review done by the Renewable Energy Network (REN 21) estimates the total capacity of power production to be 7,110 gigawatts at the end of 2018; 2,378 gigawatts (over 33%) came from renewable energy sources. In 2018 the actual contribution to the global power supply was estimated to be approximately 26%. (Because of natural fluctuations in performance the renewable energy power plants have a lower efficiency than for example coal or atomic power plants.) Hydropower plants of all sizes have the greatest potential for power production from renewable energy sources (with 1,133 gigawatts). However, the share of hydropower has been decreasing for some years. Instead the expansion of photovoltaic is proceeding rapidly. In 2018 its share of the global electricity capacity rose above 20% for the first time, with an absolute value of 511 gigawatts.

The production of heat energy from renewable sources is also progressing rapidly. The capacities available for heating, cooling and water heating amounted to 826 gigawatt (thermic) at the end of 2018. As third, big consumer sector, transportation can use renewables, at the present time mainly in the form of biofuels. When electrically powered cars become more prevalent, these can be provided with electricity and at the same time serve as storage for regeneratively produced electricity.