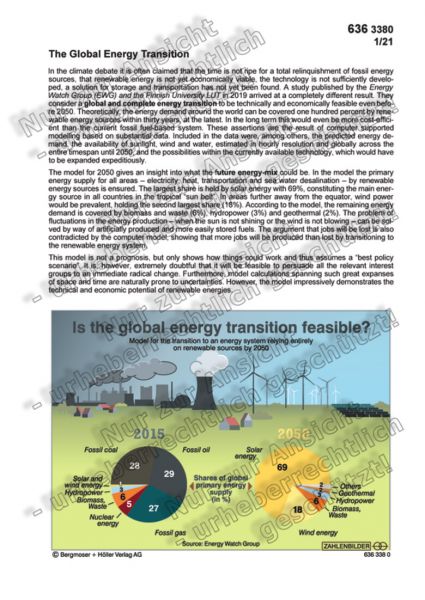 Beschreibung
Beschreibung
In the climate debate it is often claimed that the time is not ripe for a total relinquishment... mehr
Menü schließen
Mehr Details zu "The Global Energy Transition"

In the climate debate it is often claimed that the time is not ripe for a total relinquishment of fossil energy sources, that renewable energy is not yet economically viable, the technology is not sufficiently developed, a solution for storage and transportation has not yet been found. A study published by the Energy Watch Group (EWG) and the Finnish University LUT in 2019 arrived at a completely different result. They consider a global and complete energy transition to be technically and economically feasible even before 2050. Theoretically, the energy demand around the world can be covered one hundred percent by renewable energy sources within thirty years, at the latest. In the long term this would even be more cost-efficient than the current fossil fuel-based system. These assertions are the result of computer supported modelling based on substantial data. Included in the data were, among others, the predicted energy demand, the availability of sunlight, wind and water, estimated in hourly resolution and globally across the entire timespan until 2050, and the possibilities within the currently available technology, which would have to be expanded expeditiously.

The model for 2050 gives an insight into what the future energy-mix could be. In the model the primary energy supply for all areas – electricity, heat, transportation and sea water desalination – by renewable energy sources is ensured. The largest share is held by solar energy with 69%, constituting the main energy source in all countries in the tropical “sun belt”. In areas further away from the equator, wind power would be prevalent, holding the second largest share (18%). According to the model, the remaining energy demand is covered by biomass and waste (6%), hydropower (3%) and geothermal (2%). The problem of fluctuations in the energy production – when the sun is not shining or the wind is not blowing – can be solved by way of artificially produced and more easily stored fuels. The argument that jobs will be lost is also contradicted by the computer model, showing that more jobs will be produced than lost by transitioning to the renewable energy system.

This model is not a prognosis, but only shows how things could work and thus assumes a “best policy scenario”. It is, however, extremely doubtful that it will be feasible to persuade all the relevant interest groups to an immediate radical change. Furthermore, model calculations spanning such great expanses of space and time are naturally prone to uncertainties. However, the model impressively demonstrates the technical and economic potential of renewable energies.