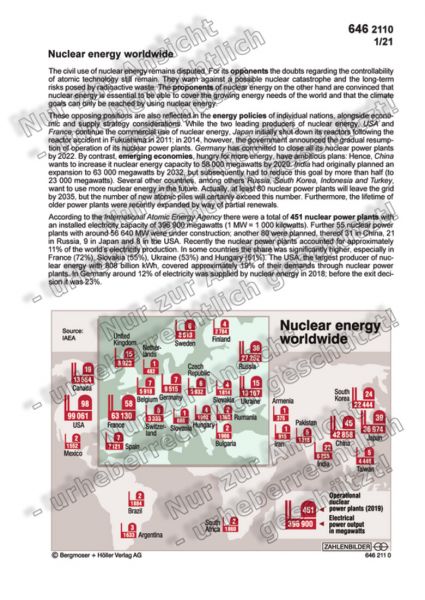 Beschreibung
Beschreibung
The civil use of nuclear energy remains disputed. For its opponents the doubts regarding the... mehr
Menü schließen
Mehr Details zu "Nuclear Energy worldwide"

The civil use of nuclear energy remains disputed. For its opponents the doubts regarding the controllability of atomic technology still remain. They warn against a possible nuclear catastrophe and the long-term risks posed by radioactive waste. The proponents of nuclear energy on the other hand are convinced that nuclear energy is essential to be able to cover the growing energy needs of the world and that the climate goals can only be reached by using nuclear energy.

These opposing positions are also reflected in the energy policies of individual nations, alongside economic and supply strategy considerations. While the two leading producers of nuclear energy, USA and France, continue the commercial use of nuclear energy, Japan initially shut down its reactors following the reactor accident in Fukushima in 2011; in 2014, however, the government announced the gradual resumption of operation of its nuclear power plants. Germany has committed to close all its nuclear power plants by 2022. By contrast, emerging economies, hungry for more energy, have ambitious plans: Hence, China wants to increase it nuclear energy capacity to 58 000 megawatts by 2020. India had originally planned an expansion to 63 000 megawatts by 2032, but subsequently had to reduce this goal by more than half (to 23 000 megawatts). Several other countries, among others Russia, South Korea, Indonesia and Turkey, want to use more nuclear energy in the future. Actually, at least 80 nuclear power plants will leave the grid by 2035, but the number of new atomic piles will certainly exceed this number. Furthermore, the lifetime of older power plants were recently expanded by way of partial renewals.

According to the International Atomic Energy Agency there were a total of 451 nuclear power plants with an installed electricity capacity of 396 900 megawatts (1 MW = 1 000 kilowatts). Further 55 nuclear power plants with around 56 640 MW were under construction; another 80 were planned, thereof 31 in China, 21 in Russia, 9 in Japan and 8 in the USA. Recently the nuclear power plants accounted for approximately 11% of the world’s electricity production. In some countries the share was significantly higher, especially in France (72%), Slovakia (55%), Ukraine (53%) and Hungary (51%). The USA, the largest producer of nuclear energy with 808 billion kWh, covered approximately 19% of their demands through nuclear power plants. In Germany around 12% of electricity was supplied by nuclear energy in 2018; before the exit decision it was 23%.