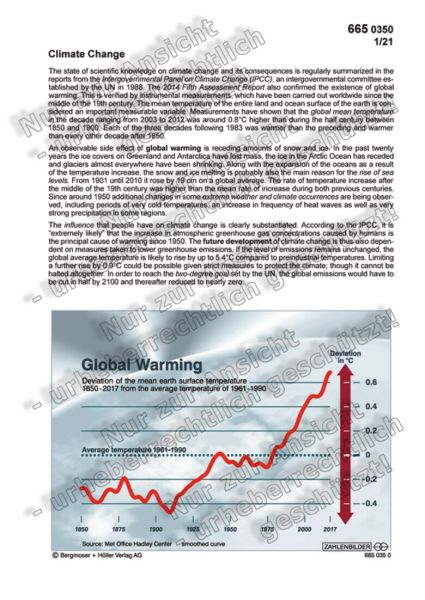 The state of scientific knowledge on climate change and its consequences is regularly summarized in the reports from the Intergovernmental Panel on Climate Change (IPCC), an intergovernmental committee established by the UN in 1988. The 2014 Fifth Assessment Report also confirmed the existence of global warming. This is verified by instrumental measurements, which have been carried out worldwide since the middle of the 19th century. The mean temperature of the entire land and ocean surface of the earth is considered an important measurable variable. Measurements have shown that the global mean temperature in the decade ranging from 2003 to 2012 was around 0.8°C higher than during the half century between 1850 and 1900. Each of the three decades following 1983 was warmer than the preceding and warmer than every other decade after 1850.

An observable side effect of global warming is receding amounts of snow and ice. In the past twenty years the ice covers on Greenland and Antarctica have lost mass, the ice in the Arctic Ocean has receded and glaciers almost everywhere have been shrinking. Along with the expansion of the oceans as a result of the temperature increase, the snow and ice melting is probably also the main reason for the rise of sea levels. From 1901 until 2010 it rose by 19 cm on a global average. The rate of temperature increase after the middle of the 19th century was higher than the mean rate of increase during both previous centuries. Since around 1950 additional changes in some extreme weather and climate occurrences are being observed, including periods of very cold temperatures, an increase in frequency of heat waves as well as very strong precipitation in some regions.

The influence that people have on climate change is clearly substantiated. According to the IPCC, it is “extremely likely” that the increase in atmospheric greenhouse gas concentrations caused by humans is the principal cause of warming since 1950. The future development of climate change is thus also dependent on measures taken to lower greenhouse emissions. If the level of emissions remains unchanged, the global average temperature is likely to rise by up to 5.4°C compared to preindustrial temperatures. Limiting a further rise by 0.9°C could be possible given strict measures to protect the climate; though it cannot be halted altogether. In order to reach the two-degree goal set by the UN, the global emissions would have to be cut in half by 2100 and thereafter reduced to nearly zero.