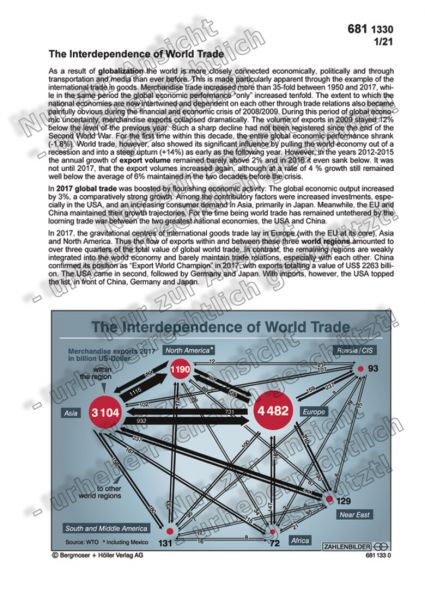 As a result of globalization the world is more closely connected economically, politically and through transportation and media than ever before. This is made particularly apparent through the example of the international trade in goods. Merchandise trade increased more than 35-fold between 1950 and 2017, while in the same period the global economic performance “only” increased tenfold. The extent to which the national economies are now intertwined and dependent on each other through trade relations also became painfully obvious during the financial and economic crisis of 2008/2009. During this period of global economic uncertainty, merchandise exports collapsed dramatically. The volume of exports in 2009 stayed 12% below the level of the previous year. Such a sharp decline had not been registered since the end of the Second World War. For the first time within this decade, the entire global economic performance shrank (-1.8%). World trade, however, also showed its significant influence by pulling the world economy out of a recession and into a steep upturn (+14%) as early as the following year. However, in the years 2012-2015 the annual growth of export volume remained barely above 2% and in 2016 it even sank below. It was not until 2017, that the export volumes increased again, although at a rate of 4 % growth still remained well below the average of 6% maintained in the two decades before the crisis.

In 2017 global trade was boosted by flourishing economic activity: The global economic output increased by 3%, a comparatively strong growth. Among the contributory factors were increased investments, especially in the USA, and an increasing consumer demand in Asia, primarily in Japan. Meanwhile, the EU and China maintained their growth trajectories. For the time being world trade has remained untethered by the looming trade war between the two greatest national economies, the USA and China.

In 2017, the gravitational centres of international goods trade lay in Europe (with the EU at its core), Asia and North America. Thus the flow of exports within and between these three world regions amounted to over three quarters of the total value of global world trade. In contrast, the remaining regions are weakly integrated into the world economy and barely maintain trade relations, especially with each other. China confirmed its position as “Export World Champion” in 2017, with exports totalling a value of US$ 2263 billion. The USA came in second, followed by Germany and Japan. With imports, however, the USA topped the list, in front of China, Germany and Japan.