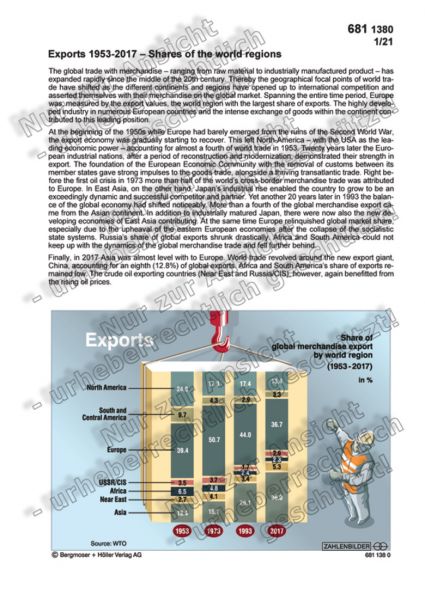 The global trade with merchandise – ranging from raw material to industrially manufactured product – has expanded rapidly since the middle of the 20th century. Thereby the geographical focal points of world trade have shifted as the different continents and regions have opened up to international competition and asserted themselves with their merchandise on the global market. Spanning the entire time period, Europe was, measured by the export values, the world region with the largest share of exports. The highly developed industry in numerous European countries and the intense exchange of goods within the continent contributed to this leading position.

At the beginning of the 1950s while Europe had barely emerged from the ruins of the Second World War, the export economy was gradually starting to recover. This left North-America – with the USA as the leading economic power – accounting for almost a fourth of world trade in 1953. Twenty years later the European industrial nations, after a period of reconstruction and modernization, demonstrated their strength in export. The foundation of the European Economic Community with the removal of customs between its member states gave strong impulses to the goods trade, alongside a thriving transatlantic trade. Right before the first oil crisis in 1973 more than half of the world’s cross-border merchandise trade was attributed to Europe. In East Asia, on the other hand, Japan’s industrial rise enabled the country to grow to be an exceedingly dynamic and successful competitor and partner. Yet another 20 years later in 1993 the balance of the global economy had shifted noticeably. More than a fourth of the global merchandise export came from the Asian continent. In addition to industrially matured Japan, there were now also the new developing economies of East Asia contributing. At the same time Europe relinquished global market share, especially due to the upheaval of the eastern European economies after the collapse of the socialistic state systems. Russia’s share of global exports shrunk drastically. Africa and South America could not keep up with the dynamics of the global merchandise trade and fell further behind.

Finally, in 2017 Asia was almost level with to Europe. World trade revolved around the new export giant, China, accounting for an eighth (12.8%) of global exports. Africa and South America’s share of exports remained low. The crude oil exporting countries (Near East and Russia/CIS), however, again benefitted from the rising oil prices.