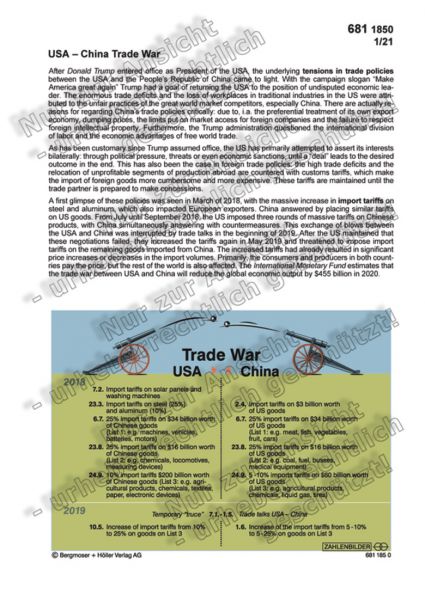 After Donald Trump entered office as President of the USA, the underlying tensions in trade policies between the USA and the People’s Republic of China came to light. With the campaign slogan “Make America great again” Trump had a goal of returning the USA to the position of undisputed economic leader. The enormous trade deficits and the loss of workplaces in traditional industries in the US were attributed to the unfair practices of the great world market competitors, especially China. There are actually reasons for regarding China’s trade policies critically: due to, i.a. the preferential treatment of its own export economy, dumping prices, the limits put on market access for foreign companies and the failure to respect foreign intellectual property. Furthermore, the Trump administration questioned the international division of labor and the economic advantages of free world trade.

As has been customary since Trump assumed office, the US has primarily attempted to assert its interests bilaterally: through political pressure, threats or even economic sanctions, until a “deal” leads to the desired outcome in the end. This has also been the case in foreign trade policies: the high trade deficits and the relocation of unprofitable segments of production abroad are countered with customs tariffs, which make the import of foreign goods more cumbersome and more expensive. These tariffs are maintained until the trade partner is prepared to make concessions.

A first glimpse of these policies was seen in March of 2018, with the massive increase in import tariffs on steel and aluminum, which also impacted European exporters. China answered by placing similar tariffs on US goods. From July until September 2018, the US imposed three rounds of massive tariffs on Chinese products, with China simultaneously answering with countermeasures. This exchange of blows between the USA and China was interrupted by trade talks in the beginning of 2019. After the US maintained that these negotiations failed, they increased the tariffs again in May 2019 and threatened to impose import tariffs on the remaining goods imported from China. The increased tariffs had already resulted in significant price increases or decreases in the import volumes. Primarily, the consumers and producers in both countries pay the price, but the rest of the world is also affected. The International Monetary Fund estimates that the trade war between USA and China will reduce the global economic output by $455 billion in 2020.