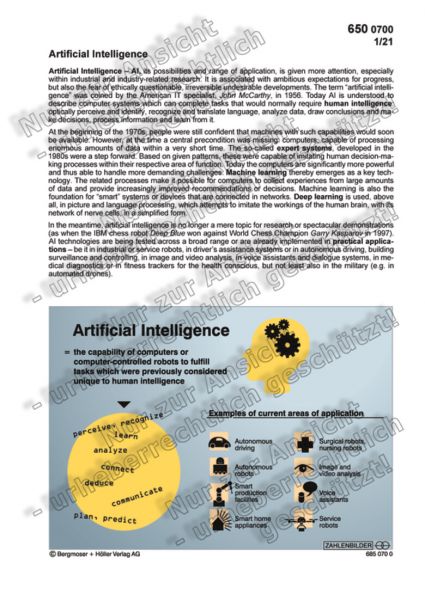 Artificial Intelligence – AI, its possibilities and range of application, is given more attention, especially within industrial and industry-related research. It is associated with ambitious expectations for progress, but also the fear of ethically questionable, irreversible undesirable developments. The term “artificial intelligence” was coined by the American IT specialist, John McCarthy, in 1956. Today AI is understood to describe computer systems which can complete tasks that would normally require human intelligence: optically perceive and identify, recognize and translate language, analyze data, draw conclusions and make decisions, process information and learn from it.

At the beginning of the 1970s, people were still confident that machines with such capabilities would soon be available. However, at the time a central precondition was missing: computers, capable of processing enormous amounts of data within a very short time. The so-called expert systems, developed in the 1980s were a step forward. Based on given patterns, these were capable of imitating human decision-making processes within their respective area of function. Today the computers are significantly more powerful and thus able to handle more demanding challenges. Machine learning thereby emerges as a key technology. The related processes make it possible for computers to collect experiences from large amounts of data and provide increasingly improved recommendations or decisions. Machine learning is also the foundation for “smart” systems or devices that are connected in networks. Deep learning is used, above all, in picture and language processing, which attempts to imitate the workings of the human brain, with its network of nerve cells, in a simplified form.

In the meantime, artificial intelligence is no longer a mere topic for research or spectacular demonstrations (as when the IBM chess robot Deep Blue won against World Chess Champion Garry Kasparov in 1997). AI technologies are being tested across a broad range or are already implemented in practical applications – be it in industrial or service robots, in driver’s assistance systems or in autonomous driving, building surveillance and controlling, in image and video analysis, in voice assistants and dialogue systems, in medical diagnostics or in fitness trackers for the health conscious, but not least also in the military (e.g. in automated drones).