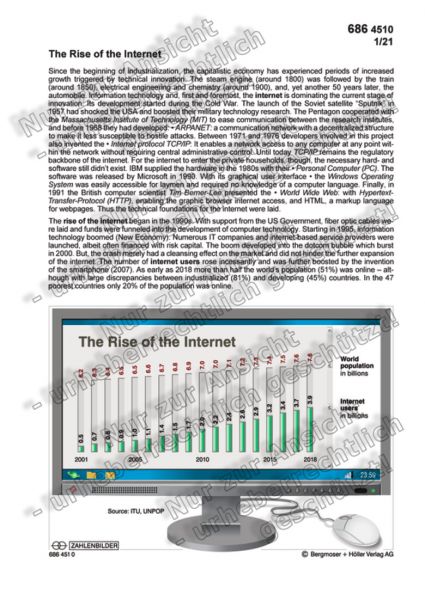 Beschreibung
Beschreibung
Since the beginning of industrialization, the capitalistic economy has experienced periods of... mehr
Menü schließen
Mehr Details zu "The Rise of the Internet"

Since the beginning of industrialization, the capitalistic economy has experienced periods of increased growth triggered by technical innovation. The steam engine (around 1800) was followed by the train (around 1850), electrical engineering and chemistry (around 1900), and, yet another 50 years later, the automobile. Information technology and, first and foremost, the internet is dominating the current stage of innovation. Its development started during the Cold War. The launch of the Soviet satellite “Sputnik” in 1957 had shocked the USA and boosted their military technology research. The Pentagon cooperated with the Massachusetts Institute of Technology (MIT) to ease communication between the research institutes, and before 1968 they had developed: • ARPANET: a communication network with a decentralized structure to make it less susceptible to hostile attacks. Between 1971 and 1976 developers involved in this project also invented the • Internet protocol TCP/IP: It enables a network access to any computer at any point within the network without requiring central administrative control. Until today TCP/IP remains the regulatory backbone of the internet. For the internet to enter the private households, though, the necessary hard- and software still didn’t exist. IBM supplied the hardware in the 1980s with their • Personal Computer (PC). The software was released by Microsoft in 1990. With its graphical user interface • the Windows Operating System was easily accessible for laymen and required no knowledge of a computer language. Finally, in 1991 the British computer scientist Tim Berner-Lee presented the • World Wide Web: with Hypertext-Transfer-Protocol (HTTP), enabling the graphic browser internet access, and HTML, a markup language for webpages. Thus the technical foundations for the internet were laid.

The rise of the internet began in the 1990s. With support from the US Government, fiber optic cables were laid and funds were funneled into the development of computer technology. Starting in 1995, information technology boomed (New Economy). Numerous IT companies and internet-based service providers were launched, albeit often financed with risk capital. The boom developed into the dotcom bubble which burst in 2000. But, the crash merely had a cleansing effect on the market and did not hinder the further expansion of the internet. The number of internet users rose incessantly and was further boosted by the invention of the smartphone (2007). As early as 2018 more than half the world’s population (51%) was online – although with large discrepancies between industrialized (81%) and developing (45%) countries. In the 47 poorest countries only 20% of the population was online.