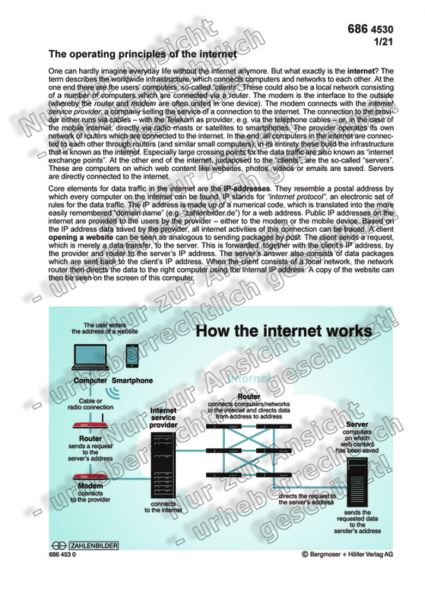 Beschreibung
Beschreibung
One can hardly imagine everyday life without the internet anymore. But what exactly is the... mehr
Menü schließen
Mehr Details zu "The operating principles of the internet"

One can hardly imagine everyday life without the internet anymore. But what exactly is the internet? The term describes the worldwide infrastructure, which connects computers and networks to each other. At the one end there are the users’ computers, so-called “clients”. These could also be a local network consisting of a number of computers which are connected via a router. The modem is the interface to the outside (whereby the router and modem are often united in one device). The modem connects with the internet service provider, a company selling the service of a connection to the internet. The connection to the provider either runs via cables – with the Telekom as provider, e.g. via the telephone cables – or, in the case of the mobile internet, directly via radio masts or satellites to smartphones. The provider operates its own network of routers which are connected to the internet. In the end, all computers in the internet are connected to each other through routers (and similar small computers); in its entirety these build the infrastructure that is known as the internet. Especially large crossing points for the data traffic are also known as “internet exchange points”. At the other end of the internet, juxtaposed to the “clients”, are the so-called “servers”. These are computers on which web content like websites, photos, videos or emails are saved. Servers are directly connected to the internet.

Core elements for data traffic in the internet are the IP-addresses. They resemble a postal address by which every computer on the internet can be found. IP stands for “internet protocol”, an electronic set of rules for the data traffic. The IP address is made up of a numerical code, which is translated into the more easily remembered “domain name” (e.g. “zahlenbilder.de”) for a web address. Public IP addresses on the internet are provided to the users by the provider – either to the modem or the mobile device. Based on the IP address data saved by the provider, all internet activities of this connection can be traced. A client opening a website can be seen as analogous to sending packages by post: The client sends a request, which is merely a data transfer, to the server. This is forwarded, together with the client’s IP address, by the provider and router to the server’s IP address. The server’s answer also consists of data packages which are sent back to the client’s IP address. When the client consists of a local network, the network router then directs the data to the right computer using the internal IP address. A copy of the website can then be seen on the screen of this computer.