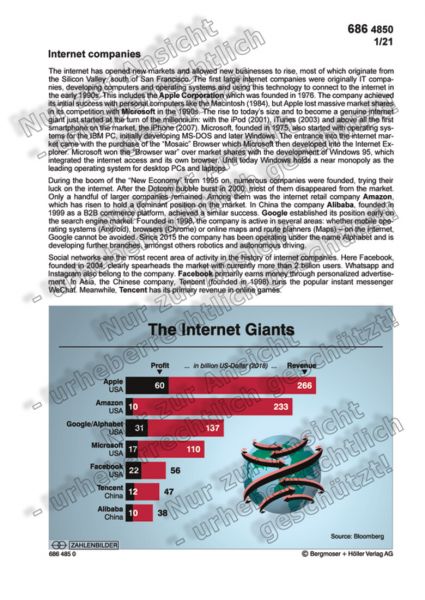 The internet has opened new markets and allowed new businesses to rise, most of which originate from the Silicon Valley, south of San Francisco. The first large internet companies were originally IT companies, developing computers and operating systems and using this technology to connect to the internet in the early 1990s. This includes the Apple Corporation which was founded in 1976. The company achieved its initial success with personal computers like the Macintosh (1984), but Apple lost massive market shares in its competition with Microsoft in the 1990s. The rise to today’s size and to become a genuine internet giant just started at the turn of the millennium: with the iPod (2001), iTunes (2003) and above all the first smartphone on the market, the iPhone (2007). Microsoft, founded in 1975, also started with operating systems for the IBM PC, initially developing MS-DOS and later Windows. The entrance into the internet market came with the purchase of the “Mosaic” Browser which Microsoft then developed into the Internet Explorer. Microsoft won the “Browser war” over market shares with the development of Windows 95, which integrated the internet access and its own browser. Until today Windows holds a near monopoly as the leading operating system for desktop PCs and laptops.

During the boom of the “New Economy” from 1995 on, numerous companies were founded, trying their luck on the internet. After the Dotcom bubble burst in 2000, most of them disappeared from the market. Only a handful of larger companies remained. Among them was the internet retail company Amazon, which has risen to hold a dominant position on the market. In China the company Alibaba, founded in 1999 as a B2B commerce platform, achieved a similar success. Google established its position early on the search engine market. Founded in 1998, the company is active in several areas: whether mobile operating systems (Android), browsers (Chrome) or online maps and route planners (Maps) – on the internet, Google cannot be avoided. Since 2015 the company has been operating under the name Alphabet and is developing further branches, amongst others robotics and autonomous driving.

Social networks are the most recent area of activity in the history of internet companies. Here Facebook, founded in 2004, clearly spearheads the market with currently more than 2 billion users. Whatsapp and Instagram also belong to the company. Facebook primarily earns money through personalized advertisement. In Asia, the Chinese company, Tencent (founded in 1998) runs the popular instant messenger WeChat. Meanwhile, Tencent has its primary revenue in online games.