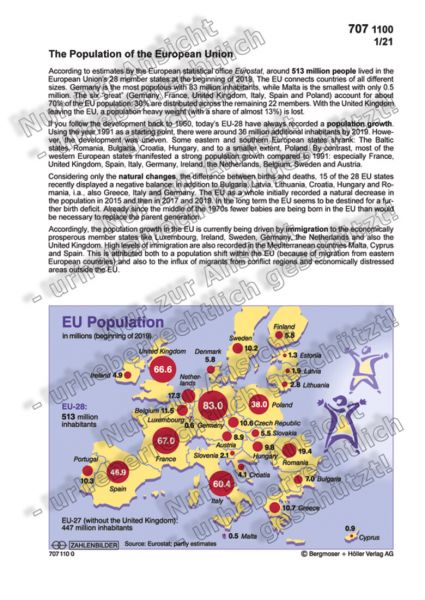 Beschreibung
Beschreibung
According to estimates by the European statistical office Eurostat, around 513 million people... mehr
Menü schließen
Mehr Details zu "The Population of the European Union"

According to estimates by the European statistical office Eurostat, around 513 million people lived in the European Union’s 28 member states at the beginning of 2019. The EU connects countries of all different sizes. Germany is the most populous with 83 million inhabitants, while Malta is the smallest with only 0.5 million. The six “great” (Germany, France, United Kingdom, Italy, Spain and Poland) account for about 70% of the EU population; 30% are distributed across the remaining 22 members. With the United Kingdom leaving the EU, a population heavy weight (with a share of almost 13%) is lost.

If you follow the development back to 1960, today’s EU-28 have always recorded a population growth. Using the year 1991 as a starting point, there were around 36 million additional inhabitants by 2019. However, the development was uneven. Some eastern and southern European states shrank: The Baltic states, Romania, Bulgaria, Croatia, Hungary, and to a smaller extent, Poland. By contrast, most of the western European states manifested a strong population growth compared to 1991: especially France, United Kingdom, Spain, Italy, Germany, Ireland, the Netherlands, Belgium, Sweden and Austria.

Considering only the natural changes, the difference between births and deaths, 15 of the 28 EU states recently displayed a negative balance: in addition to Bulgaria, Latvia, Lithuania, Croatia, Hungary and Romania, i.a., also Greece, Italy and Germany. The EU as a whole initially recorded a natural decrease in the population in 2015 and then in 2017 and 2018. In the long term the EU seems to be destined for a further birth deficit. Already since the middle of the 1970s fewer babies are being born in the EU than would be necessary to replace the parent generation.

Accordingly, the population growth in the EU is currently being driven by immigration to the economically prosperous member states like Luxembourg, Ireland, Sweden, Germany, the Netherlands and also the United Kingdom. High levels of immigration are also recorded in the Mediterranean countries Malta, Cyprus and Spain. This is attributed both to a population shift within the EU (because of migration from eastern European countries) and also to the influx of migrants from conflict regions and economically distressed areas outside the EU.