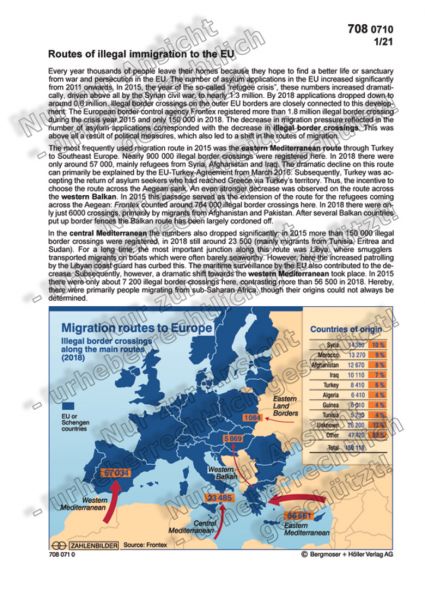 Beschreibung
Beschreibung
Every year thousands of people leave their homes because they hope to find a better life or... mehr
Menü schließen
Mehr Details zu "Routes of illegal immigration to the EU"

Every year thousands of people leave their homes because they hope to find a better life or sanctuary from war and persecution in the EU. The number of asylum applications in the EU increased significantly from 2011 onwards. In 2015, the year of the so-called “refugee crisis”, these numbers increased dramatically, driven above all by the Syrian civil war, to nearly 1.3 million. By 2018 applications dropped down to around 0.6 million. Illegal border crossings on the outer EU borders are closely connected to this development: The European border control agency Frontex registered more than 1.8 million illegal border crossing during the crisis year 2015 and only 150 000 in 2018. The decrease in migration pressure reflected in the number of asylum applications corresponded with the decrease in illegal border crossings. This was above all a result of political measures, which also led to a shift in the routes of migration.

The most frequently used migration route in 2015 was the eastern Mediterranean route through Turkey to Southeast Europe. Nearly 900 000 illegal border crossings were registered here. In 2018 there were only around 57 000, mainly refugees from Syria, Afghanistan and Iraq. The dramatic decline on this route can primarily be explained by the EU-Turkey-Agreement from March 2016: Subsequently, Turkey was accepting the return of asylum seekers who had reached Greece via Turkey’s territory. Thus, the incentive to choose the route across the Aegean sank. An even stronger decrease was observed on the route across the western Balkan. In 2015 this passage served as the extension of the route for the refugees coming across the Aegean: Frontex counted around 764 000 illegal border crossings here. In 2018 there were only just 6000 crossings, primarily by migrants from Afghanistan and Pakistan. After several Balkan countries put up border fences the Balkan route has been largely cordoned off.

In the central Mediterranean the numbers also dropped significantly: in 2015 more than 150 000 illegal border crossings were registered, in 2018 still around 23 500 (mainly migrants from Tunisia, Eritrea and Sudan). For a long time, the most important junction along this route was Libya, where smugglers transported migrants on boats which were often barely seaworthy. However, here the increased patrolling by the Libyan coast guard has curbed this. The maritime surveillance by the EU also contributed to the decrease. Subsequently, however, a dramatic shift towards the western Mediterranean took place. In 2015 there were only about 7 200 illegal border crossings here, contrasting more than 56 500 in 2018. Hereby, there were primarily people migrating from sub-Saharan Africa, though their origins could not always be determined.