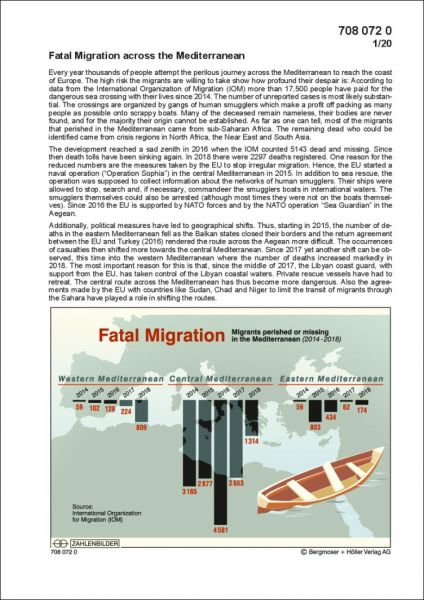 Every year thousands of people attempt the perilous journey across the Mediterranean to reach the coast of Europe. The high risk the migrants are willing to take show how profound their despair is: According to data from the International Organization of Migration (IOM) more than 17 500 people have paid for the dangerous sea crossing with their lives since 2014. The number of unreported cases is most likely substantial. The crossings are organized by gangs of human smugglers which make a profit off packing as many people as possible onto scrappy boats. Many of the deceased remain nameless, their bodies are never found, and for the majority their origin cannot be established. As far as one can tell, most of the migrants that perished in the Mediterranean came from sub-Saharan Africa. The remaining dead who could be identified came from crisis regions in North Africa, the Near East and South Asia.

The development reached a sad zenith in 2016 when the IOM counted 5 143 dead and missing. Since then death tolls have been sinking again. In 2018 there were 2 297 deaths registered. One reason for the reduced numbers are the measures taken by the EU to stop irregular migration. Hence, the EU started a naval operation (“Operation Sophia”) in the central Mediterranean in 2015. In addition to sea rescue, the operation was supposed to collect information about the networks of human smugglers. Their ships were allowed to stop, search and, if necessary, commandeer the smugglers boats in international waters. The smugglers themselves could also be arrested (although most times they were not on the boats themselves). Since 2016 the EU is supported by NATO forces and by the NATO operation “Sea Guardian” in the Aegean.

Additionally, political measures have led to geographical shifts. Thus, starting in 2015, the number of deaths in the eastern Mediterranean fell as the Balkan states closed their borders and the return agreement between the EU and Turkey (2016) rendered the route across the Aegean more difficult. The occurrences of casualties then shifted more towards the central Mediterranean. Since 2017 yet another shift can be observed, this time into the western Mediterranean where the number of deaths increased markedly in 2018. The most important reason for this is that, since the middle of 2017, the Libyan coast guard, with support from the EU, has taken control of the Libyan coastal waters. Private rescue vessels have had to retreat. The central route across the Mediterranean has thus become more dangerous. Also the agreements made by the EU with countries like Sudan, Chad and Niger to limit the transit of migrants through the Sahara have played a role in shifting the routes.