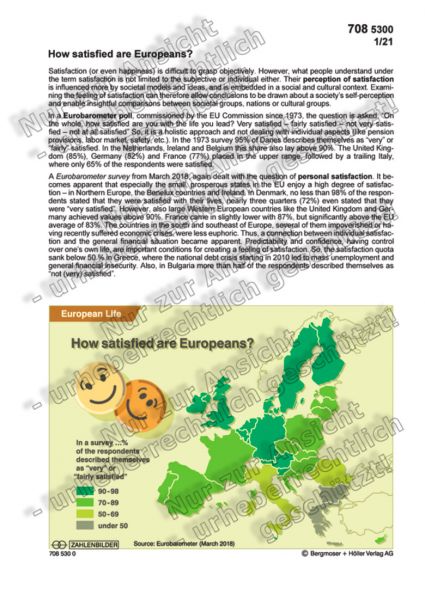 Beschreibung
Beschreibung
Satisfaction (or even happiness) is difficult to grasp objectively. However, what people... mehr
Menü schließen
Mehr Details zu "How satisfied are Europeans?"

Satisfaction (or even happiness) is difficult to grasp objectively. However, what people understand under the term satisfaction is not limited to the subjective or individual either. Their perception of satisfaction is influenced more by societal models and ideas, and is embedded in a social and cultural context. Examining the feeling of satisfaction can therefore allow conclusions to be drawn about a society’s self-perception and enable insightful comparisons between societal groups, nations or cultural groups.

In a Eurobarometer poll, commissioned by the EU Commission since 1973, the question is asked: “On the whole, how satisfied are you with the life you lead? Very satisfied – fairly satisfied – not very satisfied – not at all satisfied” So, it is a holistic approach and not dealing with individual aspects (like pension provisions, labor market, safety, etc.). In the 1973 survey 95% of Danes describes themselves as “very” or “fairly” satisfied. In the Netherlands, Ireland and Belgium this share also lay above 90%. The United Kingdom (85%), Germany (82%) and France (77%) placed in the upper range, followed by a trailing Italy, where only 65% of the respondents were satisfied.

A Eurobarometer survey from March 2018, again dealt with the question of personal satisfaction. It becomes apparent that especially the small, prosperous states in the EU enjoy a high degree of satisfaction – in Northern Europe, the Benelux countries and Ireland. In Denmark, no less than 98% of the respondents stated that they were satisfied with their lives, nearly three quarters (72%) even stated that they were “very satisfied”. However, also large Western European countries like the United Kingdom and Germany achieved values above 90%. France came in slightly lower with 87%, but significantly above the EU average of 83%. The countries in the south and southeast of Europe, several of them impoverished or having recently suffered economic crises, were less euphoric. Thus, a connection between individual satisfaction and the general financial situation became apparent. Predictability and confidence, having control over one’s own life, are important conditions for creating a feeling of satisfaction. So, the satisfaction quota sank below 50 % in Greece, where the national debt crisis starting in 2010 led to mass unemployment and general financial insecurity. Also, in Bulgaria more than half of the respondents described themselves as “not (very) satisfied”.