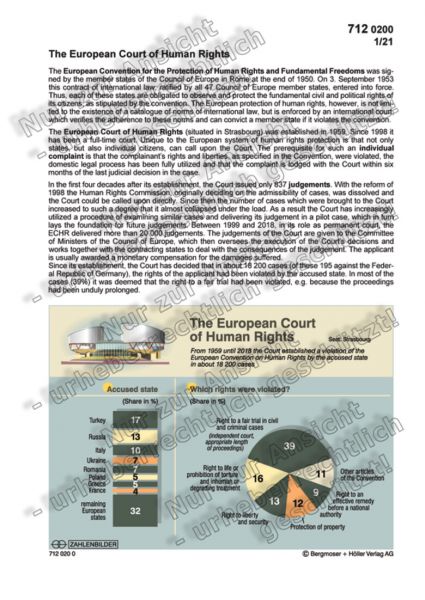 The European Convention for the Protection of Human Rights and Fundamental Freedoms was signed by the member states of the Council of Europe in Rome at the end of 1950. On 3. September 1953 this contract of international law, ratified by all 47 Council of Europe member states, entered into force. Thus, each of these states are obligated to observe and protect the fundamental civil and political rights of its citizens, as stipulated by the convention. The European protection of human rights, however, is not limited to the existence of a catalogue of norms of international law, but is enforced by an international court, which verifies the adherence to these norms and can convict a member state if it violates the convention.

The European Court of Human Rights (situated in Strasbourg) was established in 1959. Since 1998 it has been a full-time court. Unique to the European system of human rights protection is that not only states, but also individual citizens, can call upon the Court. The prerequisite for such an individual complaint is that the complainant’s rights and liberties, as specified in the Convention, were violated, the domestic legal process has been fully utilized and that the complaint is lodged with the Court within six months of the last judicial decision in the case.

In the first four decades after its establishment, the Court issued only 837 judgements. With the reform of 1998 the Human Rights Commission, originally deciding on the admissibility of cases, was dissolved and the Court could be called upon directly. Since then the number of cases which were brought to the Court increased to such a degree that it almost collapsed under the load. As a result the Court has increasingly utilized a procedure of examining similar cases and delivering its judgement in a pilot case, which in turn lays the foundation for future judgements. Between 1999 and 2018, in its role as permanent court, the ECHR delivered more than 20 000 judgements. The judgements of the Court are given to the Committee of Ministers of the Council of Europe, which then oversees the execution of the Court’s decisions and works together with the contracting states to deal with the consequences of the judgement. The applicant is usually awarded a monetary compensation for the damages suffered.
Since its establishment, the Court has decided that in about 18 200 cases (of these 195 against the Federal Republic of Germany), the rights of the applicant had been violated by the accused state. In most of the cases (39%) it was deemed that the right to a fair trial had been violated, e.g. because the proceedings had been unduly prolonged.