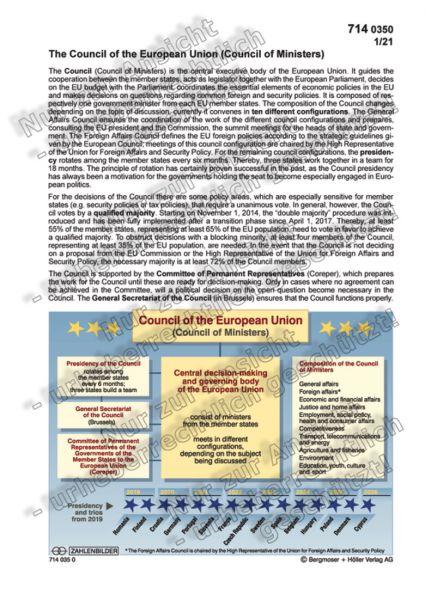 The Council (Council of Ministers) is the central executive body of the European Union. It guides the cooperation between the member states, acts as legislator together with the European Parliament, decides on the EU budget with the Parliament, coordinates the essential elements of economic policies in the EU and makes decisions on questions regarding common foreign and security policies. It is composed of respectively one government minister from each EU member states. The composition of the Council changes depending on the topic of discussion, currently it convenes in ten different configurations. The General Affairs Council ensures the coordination of the work of the different council configurations and prepares, consulting the EU president and the Commission, the summit meetings for the heads of state and government. The Foreign Affairs Council defines the EU foreign policies according to the strategic guidelines given by the European Council; meetings of this council configuration are chaired by the High Representative of the Union for Foreign Affairs and Security Policy. For the remaining council configurations, the presidency rotates among the member states every six months. Thereby, three states work together in a team for 18 months. The principle of rotation has certainly proven successful in the past, as the Council presidency has always been a motivation for the governments holding the seat to become especially engaged in European politics.

For the decisions of the Council there are some policy areas, which are especially sensitive for member states (e.g. security policies or tax policies), that require a unanimous vote. In general, however, the Council votes by a qualified majority. Starting on November 1, 2014, the “double majority” procedure was introduced and has been fully implemented after a transition phase since April 1, 2017. Thereby, at least 55% of the member states, representing at least 65% of the EU population, need to vote in favor to achieve a qualified majority. To obstruct decisions with a blocking minority, at least four members of the Council, representing at least 35% of the EU population, are needed. In the event that the Council is not deciding on a proposal from the EU Commission or the High Representative of the Union for Foreign Affairs and Security Policy, the necessary majority is at least 72% of the Council members.

The Council is supported by the Committee of Permanent Representatives (Coreper), which prepares the work for the Council until these are ready for decision-making. Only in cases where no agreement can be achieved in the Committee, will a political decision on the open question become necessary in the Council. The General Secretariat of the Council (in Brussels) ensures that the Council functions properly.