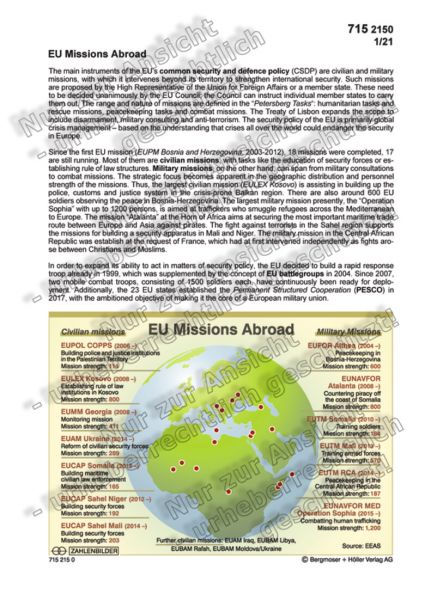 The main instruments of the EU’s common security and defence policy (CSDP) are civilian and military missions, with which it intervenes beyond its territory to strengthen international security. Such missions are proposed by the High Representative of the Union for Foreign Affairs or a member state. These need to be decided unanimously by the EU Council; the Council can instruct individual member states to carry them out. The range and nature of missions are defined in the “Petersberg Tasks“: humanitarian tasks and rescue missions, peacekeeping tasks and combat missions. The Treaty of Lisbon expands the scope to include disarmament, military consulting and anti-terrorism. The security policy of the EU is primarily global crisis management – based on the understanding that crises all over the world could endanger the security in Europe.

Since the first EU mission (EUPM Bosnia and Herzegovina, 2003-2012), 18 missions were completed, 17 are still running. Most of them are civilian missions, with tasks like the education of security forces or establishing rule of law structures. Military missions, on the other hand, can span from military consultations to combat missions. The strategic focus becomes apparent in the geographic distribution and personnel strength of the missions. Thus, the largest civilian mission (EULEX Kosovo) is assisting in building up the police, customs and justice system in the crisis-prone Balkan region. There are also around 600 EU soldiers observing the peace in Bosnia-Herzegovina. The largest military mission presently, the “Operation Sophia” with up to 1200 persons, is aimed at traffickers who smuggle refugees across the Mediterranean to Europe. The mission “Atalanta” at the Horn of Africa aims at securing the most important maritime trade route between Europe and Asia against pirates. The fight against terrorists in the Sahel region supports the missions for building a security apparatus in Mali and Niger. The military mission in the Central African Republic was establish at the request of France, which had at first intervened independently as fights arose between Christians and Muslims.

In order to expand its ability to act in matters of security policy, the EU decided to build a rapid response troop already in 1999, which was supplemented by the concept of EU battlegroups in 2004. Since 2007, two mobile combat troops, consisting of 1500 soldiers each, have continuously been ready for deployment. Additionally, the 23 EU states established the Permanent Structured Cooperation (PESCO) in 2017, with the ambitioned objective of making it the core of a European military union.