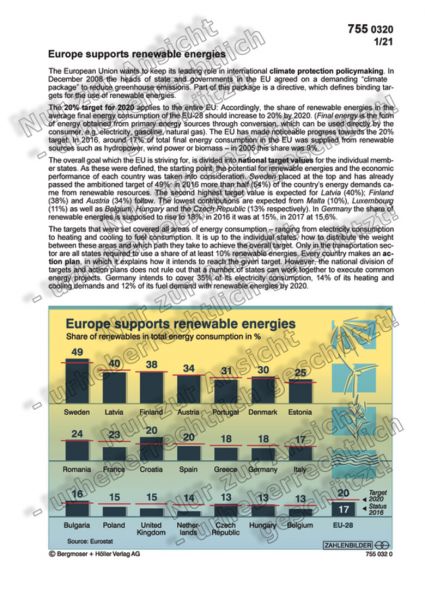 The European Union wants to keep its leading role in international climate protection policymaking. In December 2008 the heads of state and governments in the EU agreed on a demanding “climate package” to reduce greenhouse emissions. Part of this package is a directive, which defines binding targets for the use of renewable energies.

The 20% target for 2020 applies to the entire EU: Accordingly, the share of renewable energies in the average final energy consumption of the EU-28 should increase to 20% by 2020. (Final energy is the form of energy obtained from primary energy sources through conversion, which can be used directly by the consumer, e.g. electricity, gasoline, natural gas). The EU has made noticeable progress towards the 20% target: In 2016, around 17% of total final energy consumption in the EU was supplied from renewable sources such as hydropower, wind power or biomass – in 2005 this share was 9%.

The overall goal which the EU is striving for, is divided into national target values for the individual member states. As these were defined, the starting point, the potential for renewable energies and the economic performance of each country was taken into consideration. Sweden placed at the top and has already passed the ambitioned target of 49%: in 2016 more than half (54%) of the country’s energy demands came from renewable resources. The second highest target value is expected for Latvia (40%); Finland (38%) and Austria (34%) follow. The lowest contributions are expected from Malta (10%), Luxembourg (11%) as well as Belgium, Hungary and the Czech Republic (13% respectively). In Germany the share of renewable energies is supposed to rise to 18%; in 2016 it was at 15%, in 2017 at 15,6%.

The targets that were set covered all areas of energy consumption – ranging from electricity consumption to heating and cooling to fuel consumption. It is up to the individual states, how to distribute the weight between these areas and which path they take to achieve the overall target. Only in the transportation sector are all states required to use a share of at least 10% renewable energies. Every country makes an action plan, in which it explains how it intends to reach the given target. However, the national division of targets and action plans does not rule out that a number of states can work together to execute common energy projects. Germany intends to cover 35% of its electricity consumption, 14% of its heating and cooling demands and 12% of its fuel demand with renewable energies by 2020.