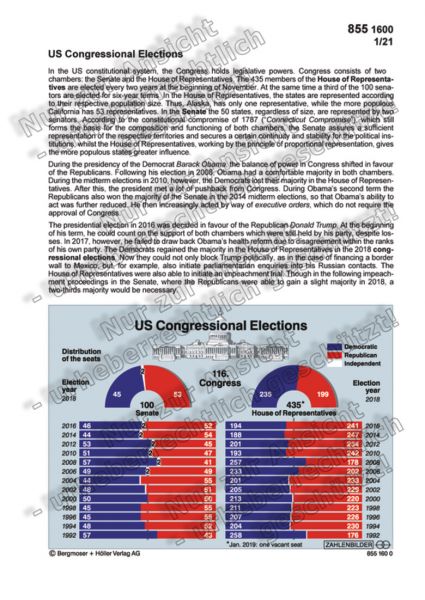 During the presidency of the Democrat Barack Obama, the balance of power in Congress shifted in favour of the Republicans. Following his election in 2008, Obama had a comfortable majority in both chambers. During the midterm elections in 2010, however, the Democrats lost their majority in the House of Representatives. After this, the president met a lot of pushback from Congress. During Obama’s second term the Republicans also won the majority of the Senate in the 2014 midterm elections, so that Obama’s ability to act was further reduced. He then increasingly acted by way of executive orders, which do not require the approval of Congress.

The presidential election in 2016 was decided in favour of the Republican Donald Trump. At the beginning of his term, he could count on the support of both chambers which were still held by his party, despite losses. In 2017, however, he failed to draw back Obama’s health reform due to disagreement within the ranks of his own party. The Democrats regained the majority in the House of Representatives in the 2018 congressional elections. Now they could not only block Trump politically, as in the case of financing a border wall to Mexico, but, for example, also initiate parliamentarian enquiries into his Russian contacts. The House of Representatives were also able to initiate an impeachment trial. Though in the following impeachment proceedings in the Senate, where the Republicans were able to gain a slight majority in 2018, a two-thirds majority would be necessary.