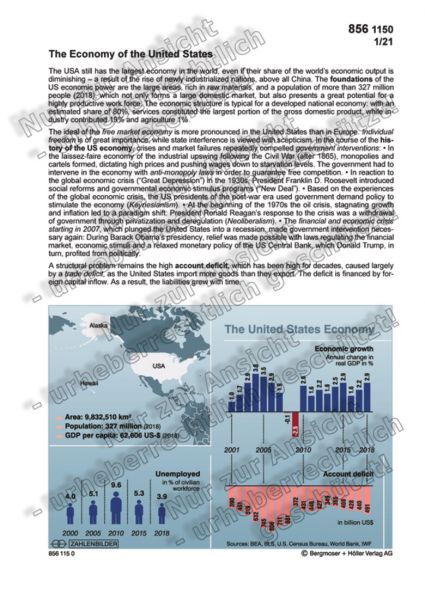 Beschreibung
Beschreibung
The USA still has the largest economy in the world, even if their share of the world’s... mehr
Menü schließen
Mehr Details zu "The Economy of the United States"

The USA still has the largest economy in the world, even if their share of the world’s economic output is diminishing – a result of the rise of newly industrialized nations, above all China. The foundations of the US economic power are the large areas, rich in raw materials, and a population of more than 327 million people (2018), which not only forms a large domestic market, but also presents a great potential for a highly productive work force. The economic structure is typical for a developed national economy: with an estimated share of 80%, services constituted the largest portion of the gross domestic product, while industry contributed 19% and agriculture 1%.

The ideal of the free market economy is more pronounced in the United States than in Europe. Individual freedom is of great importance, while state interference is viewed with scepticism. In the course of the history of the US economy, crises and market failures repeatedly compelled government interventions: • In the laissez-faire economy of the industrial upswing following the Civil War (after 1865), monopolies and cartels formed, dictating high prices and pushing wages down to starvation levels. The government had to intervene in the economy with anti-monopoly laws in order to guarantee free competition. • In reaction to the global economic crisis (“Great Depression”) in the 1930s, President Franklin D. Roosevelt introduced social reforms and governmental economic stimulus programs (“New Deal”). • Based on the experiences of the global economic crisis, the US presidents of the post-war era used government demand policy to stimulate the economy (Keynesianism). • At the beginning of the 1970s the oil crisis, stagnating growth and inflation led to a paradigm shift: President Ronald Reagan’s response to the crisis was a withdrawal of government through privatization and deregulation (Neoliberalism). • The financial and economic crisis starting in 2007, which plunged the United States into a recession, made government intervention necessary again: During Barack Obama’s presidency, relief was made possible with laws regulating the financial market, economic stimuli and a relaxed monetary policy of the US Central Bank, which Donald Trump, in turn, profited from politically.

A structural problem remains the high account deficit, which has been high for decades, caused largely by a trade deficit, as the United States import more goods than they export. The deficit is financed by foreign capital inflow. As a result, the liabilities grew with time.