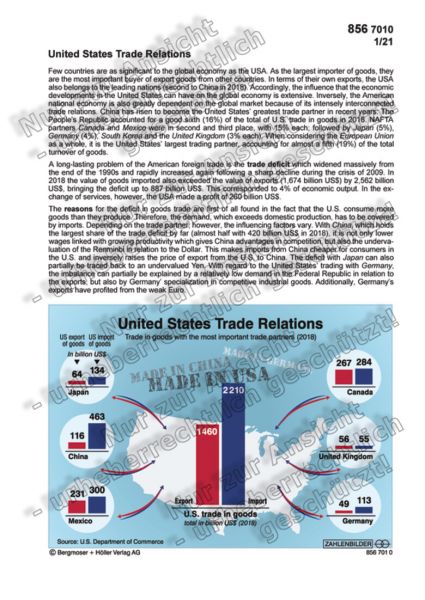 Beschreibung
Beschreibung
Few countries are as significant to the global economy as the USA. As the largest importer of... mehr
Menü schließen
Mehr Details zu "United States Trade Relations"

Few countries are as significant to the global economy as the USA. As the largest importer of goods, they are the most important buyer of export goods from other countries. In terms of their own exports, the USA also belongs to the leading nations (second to China in 2018). Accordingly, the influence that the economic developments in the United States can have on the global economy is extensive. Inversely, the American national economy is also greatly dependent on the global market because of its intensely interconnected trade relations. China has risen to become the United States’ greatest trade partner in recent years: The People’s Republic accounted for a good sixth (16%) of the total of U.S. trade in goods in 2018. NAFTA partners Canada and Mexico were in second and third place, with 15% each; followed by Japan (5%), Germany (4%), South Korea and the United Kingdom (3% each). When considering the European Union as a whole, it is the United States’ largest trading partner, accounting for almost a fifth (19%) of the total turnover of goods.

A long-lasting problem of the American foreign trade is the trade deficit which widened massively from the end of the 1990s and rapidly increased again following a sharp decline during the crisis of 2009. In 2018 the value of goods imported also exceeded the value of exports (1,674 billion US$) by 2,562 billion US$, bringing the deficit up to 887 billion US$. This corresponded to 4% of economic output. In the exchange of services, however, the USA made a profit of 260 billion US$.

The reasons for the deficit in goods trade are first of all found in the fact that the U.S. consume more goods than they produce. Therefore, the demand, which exceeds domestic production, has to be covered by imports. Depending on the trade partner, however, the influencing factors vary. With China, which holds the largest share of the trade deficit by far (almost half with 420 billion US$ in 2018), it is not only lower wages linked with growing productivity which gives China advantages in competition, but also the undervaluation of the Renminbi in relation to the Dollar. This makes imports from China cheaper for consumers in the U.S. and inversely raises the price of export from the U.S. to China. The deficit with Japan can also partially be traced back to an undervalued Yen. With regard to the United States’ trading with Germany, the imbalance can partially be explained by a relatively low demand in the Federal Republic in relation to the exports, but also by Germany’ specialization in competitive industrial goods. Additionally, Germany’s exports have profited from the weak Euro.