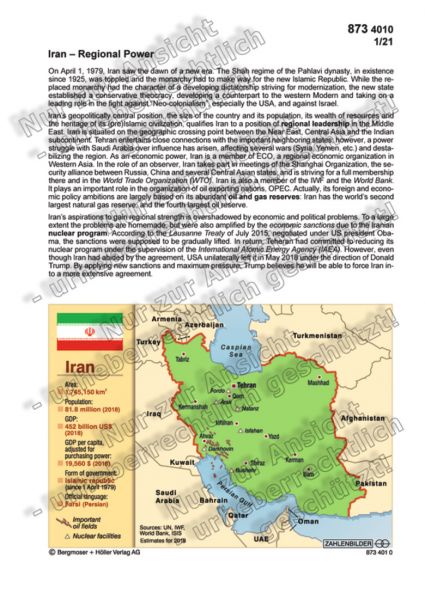 On April 1, 1979, Iran saw the dawn of a new era. The Shah regime of the Pahlavi dynasty, in existence since 1925, was toppled and the monarchy had to make way for the new Islamic Republic. While the replaced monarchy had the character of a developing dictatorship striving for modernization, the new state established a conservative theocracy, developing a counterpart to the western Modern and taking on a leading role in the fight against “Neo-colonialism”, especially the USA, and against Israel.

Iran’s geopolitically central position, the size of the country and its population, its wealth of resources and the heritage of its (pre)Islamic civilization, qualifies Iran to a position of regional leadership in the Middle East. Iran is situated on the geographic crossing point between the Near East, Central Asia and the Indian subcontinent. Tehran entertains close connections with the important neighboring states; however, a power struggle with Saudi Arabia over influence has arisen, affecting several wars (Syria, Yemen, etc.) and destabilizing the region. As an economic power, Iran is a member of ECO, a regional economic organization in Western Asia. In the role of an observer, Iran takes part in meetings of the Shanghai Organization, the security alliance between Russia, China and several Central Asian states, and is striving for a full membership there and in the World Trade Organization (WTO). Iran is also a member of the IWF and the World Bank. It plays an important role in the organization of oil exporting nations, OPEC. Actually, its foreign and economic policy ambitions are largely based on its abundant oil and gas reserves: Iran has the world’s second largest natural gas reserve, and the fourth largest oil reserve.

Iran’s aspirations to gain regional strength is overshadowed by economic and political problems. To a large extent the problems are homemade, but were also amplified by the economic sanctions due to the Iranian nuclear program. According to the Lausanne Treaty of July 2015, negotiated under US president Obama, the sanctions were supposed to be gradually lifted. In return, Teheran had committed to reducing its nuclear program under the supervision of the International Atomic Energy Agency (IAEA). However, even though Iran had abided by the agreement, USA unilaterally left it in May 2018 under the direction of Donald Trump. By applying new sanctions and maximum pressure, Trump believes he will be able to force Iran into a more extensive agreement.