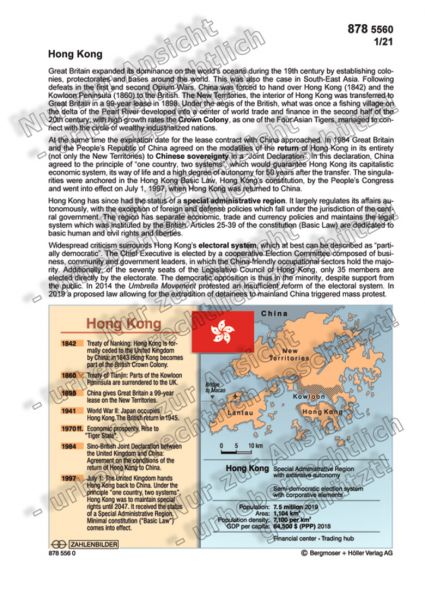 Great Britain expanded its dominance on the world’s oceans during the 19th century by establishing colonies, protectorates and bases around the world. This was also the case in South-East Asia. Following defeats in the first and second Opium Wars, China was forced to hand over Hong Kong (1842) and the Kowloon Peninsula (1860) to the British. The New Territories, the interior of Hong Kong was transferred to Great Britain in a 99-year lease in 1898. Under the aegis of the British, what was once a fishing village on the delta of the Pearl River developed into a center of world trade and finance in the second half of the 20th century; with high growth rates the Crown Colony, as one of the Four Asian Tigers, managed to connect with the circle of wealthy industrialized nations.

At the same time the expiration date for the lease contract with China approached. In 1984 Great Britain and the People’s Republic of China agreed on the modalities of the return of Hong Kong in its entirety (not only the New Territories) to Chinese sovereignty in a “Joint Declaration”. In this declaration, China agreed to the principle of “one country, two systems”, which would guarantee Hong Kong its capitalistic economic system, its way of life and a high degree of autonomy for 50 years after the transfer. The singularities were anchored in the Hong Kong Basic Law, Hong Kong’s constitution, by the People’s Congress and went into effect on July 1, 1997, when Hong Kong was returned to China.

Hong Kong has since had the status of a special administrative region. It largely regulates its affairs autonomously, with the exception of foreign and defense policies which fall under the jurisdiction of the central government. The region has separate economic, trade and currency policies and maintains the legal system which was instituted by the British. Articles 25-39 of the constitution (Basic Law) are dedicated to basic human and civil rights and liberties.

Widespread criticism surrounds Hong Kong’s electoral system, which at best can be described as “partially democratic”. The Chief Executive is elected by a cooperative Election Committee composed of business, community and government leaders, in which the China-friendly occupational sectors hold the majority. Additionally, of the seventy seats of the Legislative Council of Hong Kong, only 35 members are elected directly by the electorate. The democratic opposition is thus in the minority, despite support from the public. In 2014 the Umbrella Movement protested an insufficient reform of the electoral system. In 2019 a proposed law allowing for the extradition of detainees to mainland China triggered mass protest.