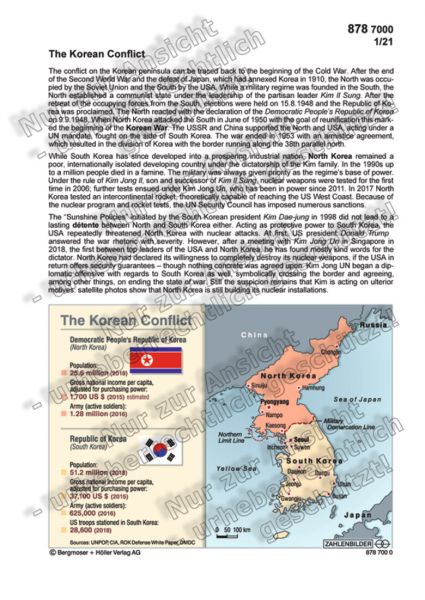 Beschreibung
Beschreibung
The conflict on the Korean peninsula can be traced back to the beginning of the Cold War. After... mehr
Menü schließen
Mehr Details zu "The Korean Conflict"

The conflict on the Korean peninsula can be traced back to the beginning of the Cold War. After the end of the Second World War and the defeat of Japan, which had annexed Korea in 1910, the North was occupied by the Soviet Union and the South by the USA. While a military regime was founded in the South, the North established a communist state under the leadership of the partisan leader Kim Il Sung. After the retreat of the occupying forces from the South, elections were held on 15.8.1948 and the Republic of Korea was proclaimed. The North reacted with the declaration of the Democratic People’s Republic of Korea on 9.9.1948. When North Korea attacked the South in June of 1950 with the goal of reunification this marked the beginning of the Korean War. The USSR and China supported the North and USA, acting under a UN mandate, fought on the side of South Korea. The war ended in 1953 with an armistice agreement, which resulted in the division of Korea with the border running along the 38th parallel north.

While South Korea has since developed into a prospering industrial nation, North Korea remained a poor, internationally isolated developing country under the dictatorship of the Kim family. In the 1990s up to a million people died in a famine. The military was always given priority as the regime’s base of power. Under the rule of Kim Jong Il, son and successor of Kim Il Sung, nuclear weapons were tested for the first time in 2006; further tests ensued under Kim Jong Un, who has been in power since 2011. In 2017 North Korea tested an intercontinental rocket, theoretically capable of reaching the US West Coast. Because of the nuclear program and rocket tests, the UN Security Council has imposed numerous sanctions.

The “Sunshine Policies” initiated by the South Korean president Kim Dae-jung in 1998 did not lead to a lasting détente between North and South Korea either. Acting as protective power to South Korea, the USA repeatedly threatened North Korea with nuclear attacks. At first, US president Donald Trump answered the war rhetoric with severity. However, after a meeting with Kim Jong Un in Singapore in 2018, the first between top leaders of the USA and North Korea, he has found mostly kind words for the dictator. North Korea had declared its willingness to completely destroy its nuclear weapons, if the USA in return offers security guarantees – though nothing concrete was agreed upon. Kim Jong UN began a diplomatic offensive with regards to South Korea as well, symbolically crossing the border and agreeing, among other things, on ending the state of war. Still the suspicion remains that Kim is acting on ulterior motives: satellite photos show that North Korea is still building its nuclear installations.