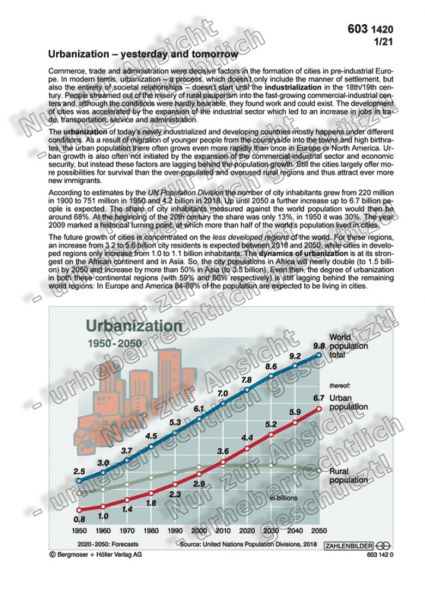 Commerce, trade and administration were decisive factors in the formation of cities in pre-industrial Europe. In modern terms, urbanization – a process, which doesn’t only include the manner of settlement, but also the entirety of societal relationships – doesn’t start until the industrialization in the 18th/19th century. People streamed out of the misery of rural pauperism into the fast-growing commercial-industrial centers and, although the conditions were hardly bearable, they found work and could exist. The development of cities was accelerated by the expansion of the industrial sector which led to an increase in jobs in trade, transportation, service and administration.

The urbanization of today’s newly industrialized and developing countries mostly happens under different conditions. As a result of migration of younger people from the countryside into the towns and high birthrates, the urban population there often grows even more rapidly than once in Europe or North America. Urban growth is also often not initiated by the expansion of the commercial-industrial sector and economic security, but instead these factors are lagging behind the population growth. Still the cities largely offer more possibilities for survival than the over-populated and overused rural regions and thus attract ever more new immigrants.

According to estimates by the UN Population Division the number of city inhabitants grew from 220 million in 1900 to 751 million in 1950 and 4.2 billion in 2018. Up until 2050 a further increase up to 6.7 billion people is expected. The share of city inhabitants measured against the world population would then be around 68%. At the beginning of the 20th century the share was only 13%, in 1950 it was 30%. The year 2009 marked a historical turning point, at which more than half of the world’s population lived in cities.

The future growth of cities is concentrated on the less developed regions of the world. For these regions, an increase from 3.2 to 5.6 billion city residents is expected between 2018 and 2050, while cities in developed regions only increase from 1.0 to 1.1 billion inhabitants. The dynamics of urbanization is at its strongest on the African continent and in Asia. So, the city populations in Africa will nearly double (to 1.5 billion) by 2050 and increase by more than 50% in Asia (to 3.5 billion). Even then, the degree of urbanization in both these continental regions (with 59% and 66% respectively) is still lagging behind the remaining world regions: In Europe and America 84-89% of the population are expected to be living in cities.